Jimi Agbaje, a former governorship candidate of the Peoples Democratic Party (PDP) in Lagos, has denied reports that he has joined the All Progressives Congress (APC). A report titled ‘Awolokan 2023’ had been circulating on social media platforms in the early hours of Wednesday, claiming that Agbaje has joined APC and endorsed APC presidential candidate, Bola Tinubu.

The statement reads, “I’m fully back in APC to join our South-West leaders as well as progressive family and friends in Lagos State.

“The Awalokan 2023 is a project that both young and old in all the nooks and crannies of the Southwest should embrace.

“On this note, I sincerely join APC from the major opposition party to add my strength.

“I believe It’s time to support and also appreciate Senator Asiwaju Bola Ahmed Tinubu as next President of the Federal Republic of Nigeria in the forthcoming Presidential election on the platform of the All Progressives Congress.”

But reacting during an appearance on Channels Television’s Politics Today, Agbaje denied the report, saying he was shocked to wake up to the news.

“I think it is one of the downsides of social media where mischief makers can just throw up anything and it is out there. There is no truth whatsoever in it, I remain in the PDP. So this is smoke without fire,” he said.

Taking to his Twitter handle, Agbaje, who wrote in Yoruba, said it’s the turn of Nigerians and he remains a member of the PDP.

READ:  "He Turned Himself Into A God" — Aregbesola Slams Tinubu Over Godfatherism In Osun

KanyiDaily recalls there were speculations that Jimi Agbaje may have dumped the PDP following a disagreement with the party leaders in the state over his loss to the governorship candidate of the All Progressives Congress (APC), Babajide Sanwo-Olu. 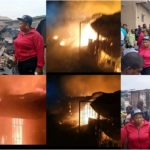 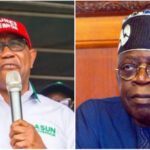