Two black teenagers were assaulted by a group of white men for swimming at a pool reserved for them at the Maselspoort Resort outside Bloemfontein in South Africa. 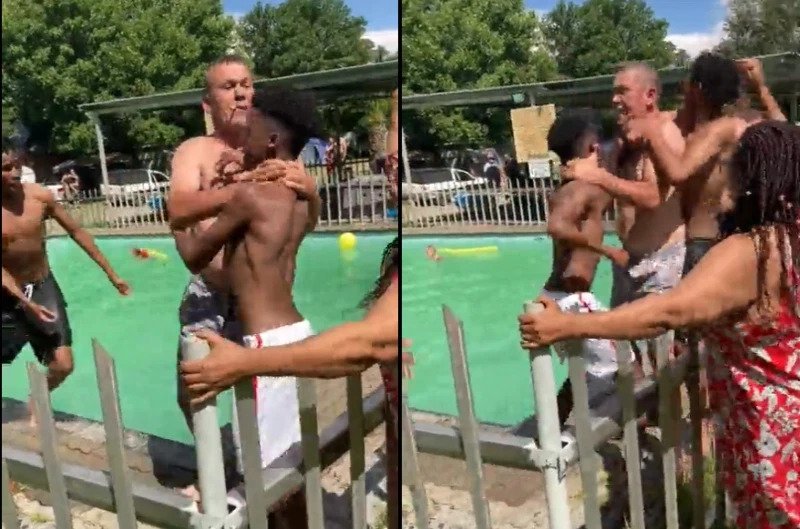 It was gathered that police are investigating the case of assault after some white men attacked two black teens at a resort on Christmas Day.

In a viral video, a white man is seen slapping a 13-year-old boy, who is then thrown back into the pool when he tries to get up.

The man then appears to try to choke another 18-year-old boy who came to defend his younger brother during the scuffle.

Attempts to break up the confrontation fail and the situation escalates when another man pulls the younger teen’s hair.

A scuffle then ensues with one man pushing one of the boys into the pool and seemingly trying to keep his head under water.

The video ends when a man drags the older black teen by the head in the pool.

The victims’ sister, Tumii, said the white men tried to prevent her brothers from using what they claim is an ‘only whites’ swimming pool.

“My brothers were attacked by these grown men because they are apparently not allowed in the pool as it’s reserved for the “white people” here. The Oranje-Vrystraat we love Merry Christmas.”

Free State police spokesperson, Brigadier Motantsi Makhele, in a statement said police were called out on Christmas Day, at 15:00 to “a fighting incident taking place at a holiday resort in Bloemfontein”.

“On arrival members found the groups already dispersed and were approached by a parent of one of the victims who alleged that his two teenage boys, aged 18 and 13, were assaulted by a group of white males over the usage of a swimming pool,” said Makhele.

“Glen police are investigating a case of common assault, and the docket will be taken to court for decision. The suspects, who are all white males as seen on the video circulating, were warned to appear in court on a date to be set by the Bloemfontein Magistrate’s court,” Makhele added.

“We condemn the behaviour as reflected in the video,” Motswenyane added.

READ:  Federal Government Directs Telcos To Bar Outgoing Calls On All SIMs Not Linked To NIN

Family came to spend the day @ MASELSPOORT RESORT & CONFERENCE CENTRE in Free State. My brothers were attacked by these grown men because they are apparently not allowed in the pool as it's reserved for the "white people" here.

Christmas 2022 in a ”whites only” pool. There’s a massive myth that there’s no racism in South Africa after the fall of Apartheid and Mandela’s attempts to reconcile the nation. Yet many, perhaps most white South Africans are just as cold hearted as they were prior to 1994. pic.twitter.com/eE4hZzRjhS

This comes four days after a Nigerian man died after he was allegedly attacked by taxi drivers in South Africa.