Vice-presidential candidate of the Labour Party (LP), Yusuf Datti Baba-Ahmed has been pictured greeting the All Progressives Congress (APC) flagbearer, Bola Tinubu, and his running mate, Kasim Shettima, during Juma’at prayers at the National Mosque, Abuja. 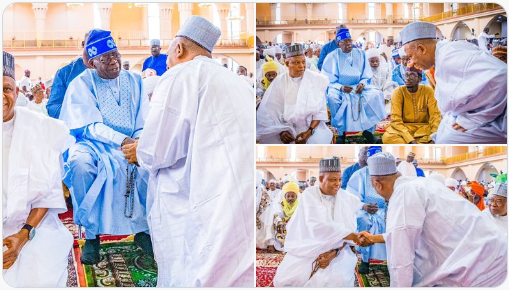 It was gathered that the APC presidential candidates were observing Juma’at prayers at the mosque when they were approached by Datti, the running mate of Peter Obi.

Though sorrow may last for a night, but joy cometh in the morning— Psalm 30:5.

The Obi-Datti Presidency Will Bring Joy To All Nigerians.🤣🤣 pic.twitter.com/sc2gtu2N2K

SEE THE LOOK👀 IN THEIR EYES, Damn!The eyes never lie . Now they know what Dr Yusuf Datti meant when he said he prefers to be underrated . Tinubu be like "so you're guy causing mental problems for me , Shettima's screwed face will always Betray him .😂.#ObiDattiInBayelsa pic.twitter.com/Yy6aTCCrmi

KanyiDaily recalls that Yusuf Datti Baba-Ahmed had assured Nigerians that the Labour party will put an end to the current security challenges confronting the country if elected into power in the 2023 general elections.