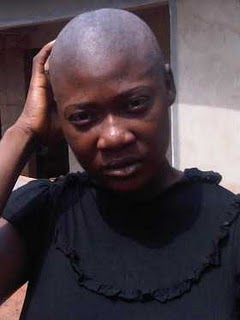 Mercy Johnson recently wept profusely on a movie location in Festac, Lagos, after reading one of the papers that wrote about her wedding crisis privately in her car.

According to source,Mercy seems to be disturbed about the scandal and many negative reactions trailing her over-hyped forthcoming wedding to an already married father of two (Odianose Okojie).
We gathered that MJ as the controversial actress is fondly called was on set with her other colleagues such as: Oge Okoye, Bobby Michael, Prince Eke and Vincent Opurum, while bemoaning her fate quietly.

According to a source “Throughout our shoot, Mercy was very sober and constantly kept to herself. In fact, after reading one of the papers that wrote about her wedding crisis privately in her car, she broke down and wept profusely. She later composed herself and told some of us around to pray for her to overcome the crisis. Our happiness was that while on set, she did not allow the situation of things to affect her job because she was the lead actress,” disclosed the insider.

Narrating further, He recalled that there was a particular day Mercy locked herself inside her car and wept like a baby.
“We all felt for her and on few occasions I also saw her praying quietly in her car, while waiting to shoot her scenes with tears rolling down her cheek. Mercy was also bold enough to tell me and some crew members to pray for her on set. Some of us bought newspapers and magazines with Mercy’s story and picture on their front covers, so her case was an open secret on our set. She read hers inside her car the first day the story broke, but was still able to control herself till we finished on set. For me, that actually makes her a strong person, because at some point we became scared and thought she was going to abandon set based on the stories in different papers, but she maintained her cool, finished all her scenes and left quietly to carry her cross alone. She was really a pathetic sight to behold in those quiet moments alone inside her car.”

On If any of the stars on set discussed the issue with Mercy or among themselves, this insider maintained nothing of such happened while he was around.

“Mercy kept to herself, so also her colleagues. Just the normal greetings, they all kept to themselves and carried on with the production that brought them together in Festac.”
Meanwhile, further findings reveals that the reason the Mercy Johnson has refused to issue a public statement on the husband snatching scandal rocking her August 27 2011 wedding is because she is considering a secret wedding, especially now that news of calling off the wedding has made the rounds.