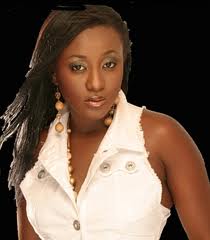 Star actress and Glo ambassador, Ini Edo has signed a two-year N40m deal with
Rebecca Fashion LTD, makers of Noble Hair Expression .The deal was signed after
telecommunication giant, Globacom renewed her contract for another two years,
making Ini one of the most sought after in the entertainment
industry.

The Noble Hair deal according to Prestige Platform LTD, “….is
worth several millions of naira. I cannot tell you the exact figure, because of
the confidentiality clause in the contract. But I can tell you for a fact that
the deal is worth over N40 million”. During the course of the deal which takes
effects from September 1, Ini will be the face of Noble Hair and she’ll endorse
Noble Hair products.

A source at Noble Hair told Showbiz Now that Ini was
appointed , because she appeals to both young and old. “You can’t box-in Ini
.She appeals to all ages and that’s valuable to Noble Hair”, the source said
.Noble Hair is a Chinese firm. Ini also endorses Globacom and Chi fruit
drinks.

Ini was recently appointed a Youth Envoy by the United Nations .
Her primary responsibility includes identifying deprived environment and doing
all she can to improve quality of life there. She did just this a while ago when
she visited Ajegunle and fed kids. Ini promised to do something about slums in
Lagos and subsequently, she declared her intention to build a school for them by
collaborating with others of like minds to improve life in Ajegunle.

In the word of her manager, he said “We
all cannot stand by and watch our kids waste away, because of neglect. We shall
build a school in Ajegunle and pass it on to a worthy organization that can run
it with our objectives in mind. We’ll raise money and add ours to make this
happen”