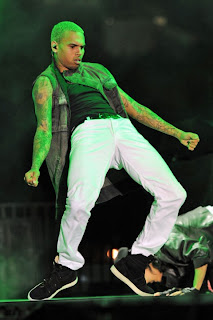 “Too many men in audience.. must stop.. pelvic thrusting…”

Yesterday, allegedly leaked DM between Chris Brown and R&B singer Martyn revealed the two allegedly had some kind of butt sex with Chris Brown being on the receiving end as almost everyone suspected.

While the authenticity of the screencaps have been questioned, Martyn has now confirmed the DMs, along with the gay sex, but also says comments were added via Photoshop. At any rate, he’s reveling in the attention on  his Twitter  along with basically telling Chris Brown (And Trey Songz, who he also allegedly banged.) to own up to it now because he’s going to keep talking.

Here are some sample tweets from the 800 he sent last night:

– @GoodBoyGoneBadd the DMs were truly sent back and forth. But that’s my business. Thanks for tuning in.
– @IzzyZolanskii @chrisbrown @treysongz I’ll confirm it. It’s all over the web. And twitter.
– @FireBombFenty @chrisbrown they are real just that someone decided to add a lil extra comment through Photoshop..why? Guess 2 b juicier
– @_KirstenBlease ofcourse Chris wouldn’t fck me…read next time…I FCKD him and the DMs are out…haven’t u read?

– @straythenomad sure man am ready for interviews and will be revealing a lot. @chrisbrown maybe u should speak up now n say something.
– @XoxoFxckYou well maybe if he had the guts to say something I would [email protected] like I said u can talk any moment now b4 it all spills
– @intangiblelove don’t be confused I’ll speak my mind n say it all on interviews soon2 [email protected] it’s out so just cal me b4 it spills
– @BeckyDoran_ they look pretty real to me…tho sum1 if not a mag tried switching something up to make it bigger.
– @_Ryanchris can’t say/give info till I finish interviews 🙂 stay tuned. Am da 1stChris brown alleged lover to come forward with a face damn

While all of this sounds suspiciously self-promoting, if women are allowed to exploit having sex with a male celebrity for a chance at fame, it’s only fair that gay guys have the same right. Tha is America, goddammit, the land of opportunity if opportunity means fucking rich people so you don’t have to get a job. It’s what they were founded on.