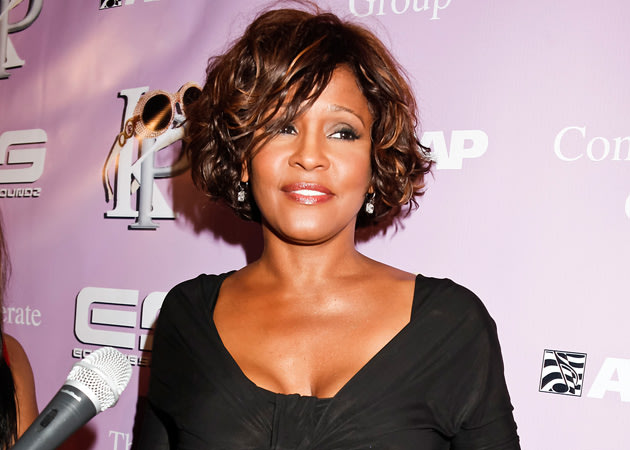 We’re sad to report Whitney Houston died in Los Angeles on yesterday afternoon aged 48.
A member of the singer’s entourage found her in her hotel room at the Beverly Hilton and called hotel security, who called for an ambulance. Paramedics tried CPR, but Whitney was pronounced dead at 3.55pm.
The singer was reportedly found in the bathtub, leading to speculation she might have drowned. No illegal drugs have been found in the room, but prescription drugs have been.

Her body has been taken to the morgue for an autopsy to determine cause of death.

Whitney’s mother, Cissy Houston, and cousin, Dionne Warwick are both said to have spoken with her before she died and thought she sounded fine.

Whitney was last seen out in Hollywood for a Grammy party on Thursday night. The song she sang at the party was to become her final performance.

It is reported that Whitney “partied heavily” at the hotel the night before her death.

She leaves behind a daughter, Bobbi Kristina.

Bobby Brown, to whom Whitney was married from 1992-2007, was said to be “in and out of crying fits.” He managed to perform with his band New Edition last night in Mississippi, and blew kisses into the air as he shouted: “I love you, Whitney.

Whitney was due to open Clive Davis’ pre-Grammy party at the hotel ahead of the awards ceremony this evening. The man who helped Whitney to stardom was comforted by Alicia Keys.

Clive said: “I am personally devastated by the loss of someone who has meant so much to me. She was full of life, looking forward for tonight. She loved music and she loved this night that celebrated music.

“Whitney was a beautiful person and she had a talent beyond compare. She graced this stage … so many times. So simply put: Whitney would have wanted the music to go on.”

Tony Bennett, who opened the party with his performance, said on stage: “First it was Michael Jackson, then Amy Winehouse, now the magnificent Whitney Houston. Let’s legalize drugs, like Amsterdam, it’s a very sane city now.”

Many of Whitney’s famous friends and fans have taken to Twitter to pay their respects.

Rihanna tweeted: “No words! Just tears #DearWhitney”
She added: “I honestly can’t think of anything else!!! Feels so strange being at the Grammy rehearsal right now!!”

Katy Perry tweeted: “So devastating. We will always love you Whitney, R.I.P.”

Justin Bieber said: “Just heard the news. so crazy. One of the GREATEST VOICES EVER just passed. RIP Whitney Houston. My prayers go out to her friends and family.”

Christina Aguilera said: “We have lost another legend. Love and prayers to Whitney’s family. She will be missed.”

Jessica Simpson tweeted: “I found my voice singing Whitney Houston’s music. Today I lost my idol.”
LeAnn Rimes said: “I can’t stop crying. I have a show to do soon. Wow, I learned how to do what I do because of 3 great women, one being Whitney. She was always so kind to me. This is not gonna be an easy show for sure. I’m doing what she taught me to do by listening to her records over & over as a little girl. Her death is very surreal.”

Mariah Carey said: “Heartbroken and in tears over the shocking death of my friend, the incomparable Ms. Whitney Houston.
“My heartfelt condolences to Whitney’s family and to all her millions of fans throughout the world. She will never be forgotten as one of the greatest voices to ever grace the earth.”

Mariah’s husband Nick Cannon said: “Tell our loved ones how much we love them while they’re still here. I wish I could’ve told Whitney how great she was one last time.”

Dolly Parton, who wrote ‘I Will Always Love You’ said: “mine is only one of the millions of hearts broken over the death of Whitney Houston.
“I will always be grateful and in awe of the wonderful performance she did on my song and I can truly say from the bottom of my heart, ‘Whitney, I will always love you. You will be missed.'”

Whitney’s godmother Aretha Franklin said: “I just can’t talk about it now. It’s so stunning and unbelievable. I couldn’t believe what I was reading coming across the TV screen. My heart goes out to Cissy (Houston’s mother), her daughter Bobbi Kris, her family and Bobby (Brown).”

Our thoughts are with Whitney’s family, friends. Will be missed by millions. Until it is proven know one should point the finger .They said the same about Amy Winehouse. Know one knows what her life was like behind closed doors.