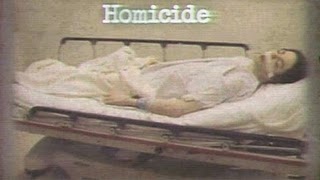 A photo of Michael Jackson lying dead in a hospital bed was shown in a courtroom
today and jurors heard a shocking audio tape of a drugged Jackson slurring his
words so badly that he was barely understandable.

The photo and the audio were part of the opening statement prosecutors made
at the trial of Dr. Conrad Murray, who is accused of involuntary manslaughter in
the death of the king of pop.

Murray’s lawyer, Ed Chernoff, told the court that Murray isn’t to blame for
Jackson’s death, that Jackson gave himself of dose of drugs that killed him so
quickly that Jackson “didn’t even have time to close his eyes.”

Attorney David Walgren showed a photo of Jackson dancing at the Staples
Center the night before he overdosed on propofol and put the picture side by
side with a picture of Jackson lying lifeless in a hospital bed, draped in a
hospital gown.

“What happened between that time and approximately 12 hours later when
Michael Jackson is dead on June 25, 2009?” Walgren asked. “What you will learn
through the evidence is that what happened during that time frame is that the
acts and omissions of Michael Jackson’s personal doctor, Conrad Murray, directly
led to his premature death at the age of 50.”

Murray, 58, could face four years in prison and lose his medical license if convicted. Throughout the opening statement, prosecutors attacked Murray’s
medical skills, saying he showed gross negligence and abandonment in his
treatment of Jackson.

Prosecutors played a recording of a drugged Jackson. The recording had been
made on Murray’s iPhone on May 10, 2009, a little more than a month before
Jackson died.

Jackson’s voice is nearly unrecognizable as he stumbles and talks slowly
about the impact he hopes his “This Is It” Tour will have. Jackson was preparing
for the 50-night grueling comeback tour at the time of his death.

“I’m taking that money, a million children, children’s hospital the biggest
in the world. Michael Jackson’s Children’s Hospital,” Jackson says in the
recording.

The prosecutor also said that the upcoming tour was important to Jackson
because it would be the first time that his children would see him perform.The
courtroom is packed with the Jackson family members including father Joe
Jackson, mother Kathryn Jackson and siblings like Janet Jackson.

Murray, in a gray pin striped suit, looked stunned at the evidence compiled
against him. He cried when his defense attorney, Ed Chernoff, delivered the
defense’s opening statement.

The defense claimed that Jackson took a sedative and then a final dose of
propofol without his doctor’s knowledge. The sedative lorazepam coupled with the
propofol created a “perfect sorm in his body that killed him instantly.”