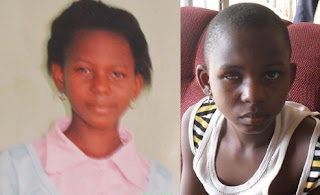 A 10 year primary four
pupil at Okhoro Primary School, Okhoro, Benin, Miss Blessing Okaeben, has
instituted a N500million suit against her teacher, Mrs. Mercy Iyobosa Monday at
the Federal High Court, Benin, for flogging and beaten her with a broom leading
to blindness of her left eye, for failing her Mathematics test

In the Originating Motion brought under Order 2 Rule 1
of the Fundamental Rights (Enforcement Procedure) Rules 2009 by her Counsel,
Bamidele Igbinedion Esq. Miss Okaeben asked the court to declare that the
accusation of witchcraft and flogging/beating with a big cane and then a broom
by her class teacher for failing a Mathematics test amounted to physical,
emotional abuse, maltreatment, punishment, cruelty, torture, inhuman and
degrading treatment.

She averred that the action of her class teacher has
grossly violated her fundamental right to respect for the dignity of her human
person as guaranteed by Sections 34 of the Constitution of the Federal Republic of Nigeria 1999 as amended, Article 5 of the
African Charter on Human and peoples’ Rights among others.