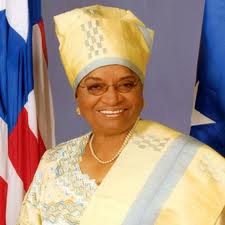 SEVENTY TWO-year-old President of Liberia, Mrs. Ellen Johnson Sirleaf who is bent on running for a second term in next month’s election in Liberia, has explained why former South African President, Nelson Mandela’s option to serve for only one term is not applicable to her.

In an exclusive but brief interview in Abuja after her assignment at a function organised by the Economic and Financial Crimes Commission (EFCC) in Abuja this week, the 26th president of the once war-torn Liberia, said foreign observers and analysts should not be upset by her decision to contest for a second term contrary to her earlier pledge that she would not run for a second term.
The mother of four children and eight grand children who said she is mentally and physically fit, told The Guardian that the reconstruction effort in Liberia is still at infancy. Specifically, she argued that the circumstance under which the legendary Nelson Mandela spent only one term in South Africa is markedly different from the political conditions that brought her to office six years ago.
Her words: “I am both physically and mentally capable as any person younger than I am and I am in good health. The conditions in Liberia and South Africa are quite different. President Nelson Mandela inherited a developed country with functioning institutions with infrastructure in place
“In contrast, I inherited a country that was broken, with a collapsed economy, dysfunctional institutions, impoverishment, debt, distress, young unemployed people that have been bereft of educational training. It has taken us these first six years to build that foundation to repair a broken country. And we have made a lot of progress, restoring peace and stability, rekindling our credit worthiness.
“We have been re-building the reputation of our country, opening the society so that people could enjoy basic freedoms. We have been on site to repair our infrastructure, electricity, water and other things that were missing from our country for over two decades. We have been fixing the roads, getting our kids back to school. It has been an awesome responsibility.
“Now that we have started and are on course, it is not expedient that we abandon it. We need to consolidate those things and take the progress we have made to another level.
“But at the same time, I realise that there is need for generational change. I am very mindful of that and that is why I have so many young people in the government holding ministerial positions, preparing themselves to take over.
“Our election process has not included them yet: it included the same people we contested with in 2005, and we want them, because the Liberian people believe we have better capability and commitment to get the progress they now see and they don’t want us to go back.
“So I am responding to the will of the people that we need now to move on and now prepare for the generational change after my last term.”