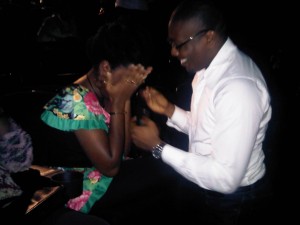 In a dramatic and romantic style, FAB Magazine’s Style Editor, Yoanna Pepper Okwesa got a marriage proposal from her fiancée at the cinema hall of Silverbird Galleria yesterday evening. According to an eyewitness’, movie goers were settling in to watch the new Hollywood action flick starring Harrison Ford and Daniel Craig, ‘Cowboys and Aliens’ but got a romantic teaser first.

“The adverts that usually run before the movie begins had played thrice in a row and the audience was getting apprehensive when Yvonne Pepper Okwesa, her mum and her fiancée walked in,” the witness narrated. “As they settled in, the text chronicling their journey began to display on the Cinema Screen reading as “it all started with the line ‘will you dance with me’ and ended with her fiancée, through the screen messages, describing her as many sweet things including ‘ my Margret Thatcher’.”

“At that point Okwesa began to get suspicious and asked him if this was his doing,” the witness continued. “The lights were turned on in the cinema hall as her beau went on his knee, the crowd’s cheers drowned the proposal but not Okwesa’s “Yes! Yes! Yes!”

Why I’m running for second term, by Ellen Johnson-Sirleaf