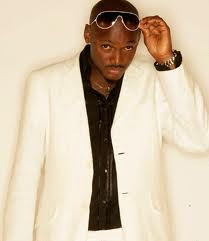 Superstar Tuface idibia and his friend, Matthew Ohio, saved the life of a police officer who  was shot by armed robbers on sunday night. Tuface  and Ohio were on their way from a club to Southern Sun Hotel, Ikoyi around 3am when they discovered the body of Corporal Ganiu somewhere along Muri Okunola, Victoria Island, Lagos.

Ohio, the Executive Producer of Industry Nite explained  they ignored the rumours that gun shots were heard on Muri Okunola and left the club for the hotel in Tuface Idibia’s car, with him behind the wheels.

When they saw the body lying on the street, they feared the many dangers that could come with stopping on the road at that time of the morning but they pushed such thoughts aside and stepped out to help the man. 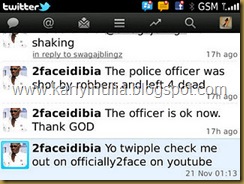 They were informed that the officer was shot in the hand, stomach and leg by armed robbers barely 5 minutes before their arrival and was separated from his other police partners. Tuface and Ohio immediately helped the bleeding officer into the car and drove him to Reddington hospital, also in Victoria Island.

The hospital was initially reluctant to accept the patient as it was a gunshot case, but eventually admitted him based on Tuface’s status.Ganiu was subsequently transferred to an unconfirmed hospital by the police and is now in stable condition.

Tuface later  tweeted about the incident confirming the officer is ok.

He did a good Job…its not easy to stop and help someone in the middle of night bearing in mind the security vcondition in this our country….Thumbs up to Tuface….meanwhile Follow Me On Twitter @Kanyinulia