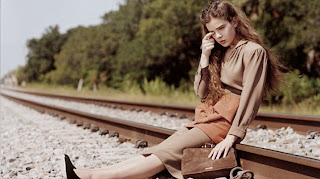 The
Prada fashion giant has been censured over the use of ‘dangerous’
images featuring Oscar nominated child actress Hailee Steinfeld.
An
advertisement for the label’s Miu Miu range showed the 14-year-old
sitting alone and apparently upset and crying on a railway track.
The
Advertising Standards Authority (ASA) received a complaint that it was
‘irresponsible’ because it was suggestive of youth suicide…Fell in love with both comments below.

Personally I find it weird that she (a child) is modelling adult clothing, never mind the train tracks!
If the ad campaign was aimed at adult women the why are they using a child model. Prada new exactly what they were portraying. To suggest otherwise when they were “outted” is an insult to our intelligence.

The watchdog rejected this concern, but has ruled the image broke industry codes because it showed a child in an unsafe location.

The teenager achieved instant fame last year after she received an Oscar nomination for her role in a remake of the classic Western True Grit.
Prada defended the advertisement saying it was part of a ‘serious, high-fashion campaign aimed at adult women’ and that it was placed only in adult, high-fashion magazines such as Tatler.
It said the image was meant to portray the actress in between takes of the film, while she was waiting for the next scene to begin.
The firm said Miss Steinfeld was not crying, nor had she been asked to cry or look upset. Rather, they said the ad pictured her with a ‘wistful and thoughtful face’.
Prada also highlighted the fact that no-one was put in any danger because the images, which were shot by top photographer and film maker Bruce Weber, were taken on an abandoned rail track.
However, the ASA said: ‘Because the ad showed Hailee Steinfeld, who was 14 years of age only when the photo was shot, in a potentially hazardous situation sitting on a railway track, we concluded the ad was irresponsible and in breach of the Code in showing a child in a hazardous or dangerous situation.
‘The ad must not appear again in its current form.’

Note to Justin Bieber: If you’re going to wear your trousers that low… make sure your pants aren’t a girly shade of pink!

‘Basically it was your fault… you were thick enough to leave your window open’: ‘Apology’ from shameless burglar, 16, blames his victims