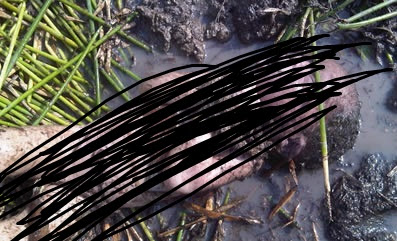 Oh My God. Who would do such to a lovely baby…Some people will do the unthinkable all in a bid to make money overnight…This is not just fair. What will the parents of this innocent baby ask God…SMH. Read the story below, as reported by Sunnewsonline

Who are the parents of the baby girl that was dumped in a swamp by suspected ritualists at 6th Avenue, Festac, Lagos, on Monday?

This is the question agitating the minds of hundreds of people who besieged the area to catch a glimpse of the unfortunate baby. The bizarre act was carried out at about 12noon.

A close look at the baby whose arms were tied, revealed that her upper region was ripped open and some organs removed. Her mouth was also stuffed with some materials or items apparently used for the rituals.

The uncensored photo when you continue…but please be warned that the photo is gruesome, heartbreaking, and so painful to look at…if you don’t have the heart, don’t continue… The suspected ritualists came in six cars and were about 15 men and a woman.

A source told Daily Sun that he saw the people who arrived the scene in their cars and became curious. “I saw when they carried something and entered into the bush. I wanted to challenge them but I was afraid, because they were many. Immediately they left after some minutes, I entered into the bush, where I saw a little baby whose hands were tied. We later invited policemen from Festac.

Similar sacrifice was performed at the same place, the same period last year. We decided to monitor their activities this year. We are really worried about this ugly development,” he said.

Policemen from Festac later visited the scene and took pictures of the baby.

When the Daily Sun called the command’s Public Relations Officer, Mr. Samuel Jinadu, to comment on the incident, he did not pick his calls.

A source at the Area ‘E’ Police Command Festac, who confirmed the incident said the headquarters had been duly informed.