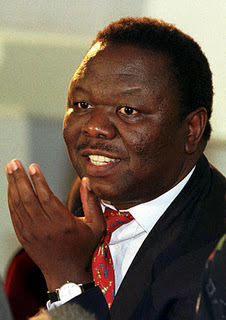 Mr Tsvangirai said their relationship had been “irretrievably damaged” after it was “hijacked” by political opponents.

His representatives paid a bride price of several thousand dollars and cattle at a ceremony on 18 November.  Mr Tsvangirai is in a coalition with his rival, President Robert Mugabe.

In a statement, Mr Tsvangirai, 59, said he doubted he would have a “perfect union” with the 39-year-old Ms Tembo, a commodity trader and sister of an MP in Mr Mugabe’s Zanu-PF party
“The ‘marriage’ has been hijacked and there is an apparent active political hand that is now driving the processes,” he said in a statement.

“State security agents have also weighed in to force and direct proceedings which has resulted in everything regarding this relationship now taking place on camera, with public media journalists in tow.”

Mr Tsvangirai denied media reports that he had been present at the traditional ceremony on 18 November in Christon Bank, about 25km (15 miles) north of Harare.

He had been at his office and had sent a delegation to Ms Tembo’s family home to “formalise” the relationship, he said.

“Reputations have been bruised and mutual trust… has been lost”
“I have become a spectator in this relationship and things are happening too fast, on camera and without my knowledge,” Mr Tsvangirai added.
“This has led me to conclude that there is a greater and thicker plot around this issue which has undermined my confidence in this relationship.”

Mr Tsvangirai said he had informed Ms Tembo’s family of the breakdown in their relationship.