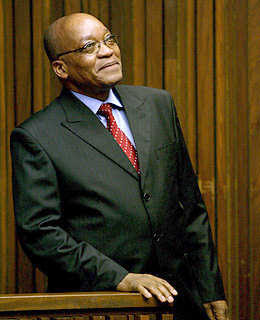 “President Jacob Zuma has today, 20 April 2012, married Ms Bongi Ngema at a traditional ceremony known as umgcagco at his home in Nkandla, KwaZulu-Natal,” his office said in a statement.

“A wedding reception will be held this evening, and tomorrow there will be the umabo, where the bride showers the groom’s family with gifts.”

The bridal party took part in a traditional Zulu celebratory dance after tying the knot in Zuma’s rural home village.

The couple have a seven-year-old son and the businesswoman and long-time fiance joins three other wives as one of four first ladies, the presidency said.

“The new Mrs Zuma had already been part of the spousal office machinery in terms of administrative support so there will be no changes due to the wedding,” said the statement.

The wedding is Zuma’s third in just over four years and the second since coming to power in 2009 as the country’s first president with multiple wives, something that is legal under liberal post-apartheid laws.

In all, he has married six times. One of his wives has died, and another — home affairs minister Nkosazana Dlamini-Zuma — divorced him.