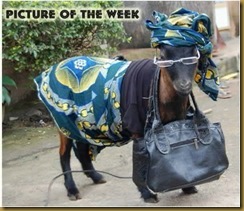 A CHIRUMHANZU man appealed to police for help after being ordered to pay lobola and marry a goat he was allegedly seen having sex with.

According to The Chronicle newspaper, the 34 year-old was caught sexually abusing the goat last Wednesday night by theanimal’s owners.

The Sithole family is said to have assaulted him before dumping the animal at his homestead and demanding lobola….hahahahah continue reading dearie, serves him right.

“This was not the first time that Dziva has been caught red-handed being intimate with the neighbour’s goats,” a local villager told the newspaper.

“He however, got himself into trouble this time when the Sithole family then decided to dump their goat his home. They are demanding that he pays lobola and take the goat as his wife.”
Negotiations between the two families to resolve the issue collapsed, forcing Dziva to appeal to local police for help.

Offers at the Mvuma police station referred the matter to the local chief.
Dziva admitted being found in the Sithole family’s goats’ pen but dismissed allegations he had been intimate with the animal.

“It’s only suspicion, I was not caught red-handed but they (Sithole family) claim that their goat is pregnant and they are demanding that I pay for that,” he told the newspaper.
“If they found me in there (goat pen), does that mean I was being intimate with their goat?”
A local headman said the matter had since been referred to the area’s chief.