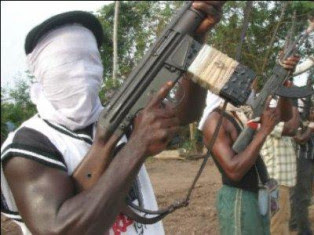 Gunmen, who kidnapped an American working for Marubeni Corp in the Niger Delta region on Friday, are demanding a N50 million ransom.
“A foreign national was kidnapped in Warri by gunmen who trailed him from Sapele,” Charles Muka, spokesman for the Delta Police Command, said.
According to him, the militants killed the victim’s police escort and forcefully took him away from the car.
“He was going to the bank when the attack occured. We do not know his nationality yet, we are still investigating,” he said.
However, a security source, who requested anonymity, said that the hostage was an American working for Japanese conglomerate, Marubeni, but did not give further details.