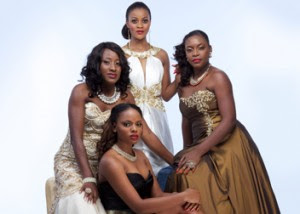 Culled from Ynaija.com
Amaka
I weep as I write
this. What have they done with Funmi Holder? She wasn’t a house-hold name, but
those who had watched her on stage and on screen before Tinsel turned her into
this Amaka know that she was one of the brightest spots on our acting field. And
one of her strongest suits was her delivery of lines. But on Tinsel, the only
thing annoying more annoying than Amaka’s abrasive persona, is her sing-song
voice. Who talks like that? Cadence is good; this however is … just ridiculous.
Does Ms. Holder not watch episodes to hear how utterly otherworldly she sounds?
Is there nobody on set there who can cry out: “Amaka, stop!”?
Angela
Off the set, she’s
one of the most loveable Tinsel cast you will find, but there are two issues
Matilda Obaseki has – none of them is unnatural; after all not everyone can
speak perfectly. One is that she has something between a lisp and a sibilant;
the other is that she also does not pronounce well enough – so she says ‘aks’
instead of ‘ask’ and ‘estent’ instead of ‘extent’. Incredibly, these kinds of
cringe-worthy moments occur so often that you can safely decipher that there are
no Take 2s on the Tinsel set. So, here’s the question: since she has this
problem, why is she also burdened with the ‘Tinsel’ accent? It’s not exactly an
Amaka ‘sing-song’, but it’s a run-on – when Angela speaks, she doesn’t have the
normal human pauses in conversation, she just goes on and on like she has to
quickly say these words and leave. It’s unnatural and takes away the power of an
otherwise magnetic character. Which really calls to question the judgement of
the soap’s directors.
Sheila
This is another cause
for tears. Surely, even the heavens know that Iretiola Doyle is one of our
acting treasures, but on Tinsel, I don’t even know what’s going on. Her
character, Sheila is made too talk too fast, and to sound too forced. Added to
her own discernible sibilant, it’s like a rush of wind. At which point, I might
add that it’s an ill wind that blows all of us no good. Then there’s that
strange thing that happens when that rush of wind falls into a whisper
especially when Sheila’s is angry. It’s quite awkward to watch. Aunty Ireti,
doesn’t it feel awkward with you too?
Telema
The other day, in a
scene with Telema speaking to Kwame about how he is such a terrible, horrible,
despicable soul (which is all kinds of irritating, because we all knew who he
was before she huffed and puffed her way into being his wife), I couldn’t help
noticing that she spoke for almost 5 minutes without her hand moving for a
minute! Actors know this is incredibly hard to carry off – so Damilola Adegbite
gets props for that. What she doesn’t get props for though is her queen of all
fake accents. She’s caught between the Tinsel accent epidemic and the strange
need for Nigerian actresses to imitate a British or American or Chinese accent
depending on their mood. This kind of thing just makes people stop taking her
seriously.
Soji
Sometimes I feel so
sorry for Poor Gbenro Ajibade – valiantly carrying a cross that’s too heavy for
him to bear. There is always a ring-out alarm when he speaks on Tinsel – like
this is a young man forced to lift a character he is ill-equipped to handle
without at least a year’s worth of acting classes and voice coaching. And is it
really necessary? I thought his character is supposed to be a successful but
still relatively broke photographer? And isn’t he supposed to be from the ghetto
or something? So why do they give him lines for him to speak the kind of English
that in an accent that always makes him look visibly constipated? Is this not
man’s inhumanity to man?
Phillip
First, Gideon Okeke
has surprised me with just how much he has settled into his character, so he
certainly deserves more than a little praise. But he is also caught in the
Tinsel web. What exactly is Philip’s accent? British? South African? Victoria
Island-ian? And why does he have to pitch sometimes like he is in the opera?
Tinsel is a Nigerian soap dude! So if you will be the spoiled child of a rich
man you have two options – you come at me with stiff upper lip of the British,
with the perfect drawl of the American and you make sure it’s flawless. If you
can’t, then I’d be darned, forget that thing and focus on pronouncing your words
clearly and speaking normally like a good Nigerian boy that went to a good
school. Gideon always sounds like he is trying too hard. Scratch that. He is
trying too hard. It’s not necessary, man: you is smart. you is talented. you is
a good actor.
Shalewa
To be honest? This
act has gotten rather old, fast. The entire love affair between Shalewa and
Titan kept us glued, but now her ‘Bad English’ and ‘Yoruba intonation’ are no
longer amusing. How does a girl who went to village schools, can hardly read and
write and can’t string a word together fluently speak about civil rights and Che
Guevara and petitions? Too often the Tinsel guys make Tomi Odunsi sound silly by
incongruously mixing perfect English with “Shalewa English”. They have to focus.
Soaps are generally about borderline plausibility, so we’re not asking for
utmost believability. But the Tinsel directors just slap our intelligence
around. Wo, very soon we will begin to stone Shalewa through the TV screens when
she comes on. You just watch