The reason is not far-fetched as the controversial artiste
has reportedly descended on a journalist over a rumoured story that he begged
for a movie role…continue to see the journalist.

The story, which was allegedly peddled last year May
2011 had it that Kelly Hansome was seen begging a movie producer for a role in
his movie.

The artiste posted a picture of the arrested journalist
online, where he was made to go naked holding a paper publication (as seen in
the picture above). Kelly Hansome then vowed to deal with other publications
that reported the said story.

At about 9:36pm yesterday, Kelly was still
ranting on dealing with media organisations that reported the story.

He
tweeted,”Just caught the guy who published the news
ABt me begging 4 Movie roles. by the time I’m done with this guy, NO journalist
will put up any news without confirming it first. I will list the [web]sites
soon for everyone to know’ 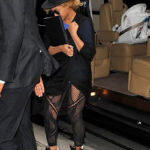