The sale complied with an order by the Competition Commission, the United Kingdom’s antitrust watchdog, asking that BAA should dispose of either Edinburgh or Glasgow airport. Ogunlesi’s GIP saw off stiff opposition from a consortium led by JP Morgan Asset Management’s infrastructure fund in landing the deal.

In a statement released on Monday, Ogunlesi, the Chairman and Managing Partner of the $5.64 billion fund managers said: “Edinburgh Airport is a high quality infrastructure asset. Its acquisition is a landmark deal for GIP and represents the first investment by GIP II.”

Ogunlesi, whose fund management company also has a 75 per cent interest in London City Airport (acquired in 2006) and another 42 per cent controlling stake in Gatwick Airport (acquired in 2009), continued: “We see significant opportunity to apply our tested and successful operational expertise and our knowledge of the global airports sector to develop and enhance the performance of Edinburgh Airport in years to come.”

Although City analysts had expected the asking price for the airport to be in the region of £500 million, Royal Bank of Scotland (RBS), which served as financial adviser to GIP for this deal, would almost certainly have suggested that the fund management firm raise the stake to the £807.2 million which it would eventually part with.

With the bar raised so high, other bidders could not match the purse.  And this might have been the reason why it not only saw off JP Morgan, which led a consortium that included United States teachers pension fund, TIAA-Cref.

Although TIAA-Cref pulled out from the deal earlier this month,  JP Morgan and other competitors like buyout groups 3i and Carlyle hung in there, but could not respond to the $800 million that Ogunlesi’s company put on the table.

With its experience, GIP is expected to improve among others, the efficiency of the airport, particularly the amount of time passengers spend in check-in and the security and baggage handling of the Scottish based airport.  Edinburgh, Scotland’s largest airport, handles  more than nine million passengers a year and 100,000 flights. 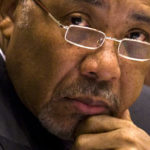