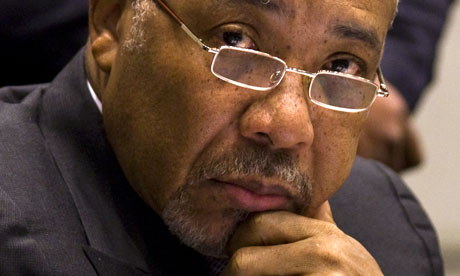 In a historic ruling, an international court convicted former Liberian President Charles Taylor on Thursday (Today)of aiding and abetting war crimes and crimes against humanity for supporting notoriously brutal rebels in neighboring Sierra Leone in return for blood diamonds.
Taylor is the first head of state convicted by an international court since the post-World War II Nuremberg military tribunal.

Taylor stood and showed no emotion as Lussick delivered the guilty verdicts at the Special Court for Sierra Leone. Lussick scheduled a sentencing hearing for May 16 and said sentence would be passed two weeks later. Taylor will serve his sentence in Britain.

Human rights activists hailed the convictions as a watershed moment in the fight against impunity for national leaders responsible for atrocities.

“Taylor’s conviction sends a powerful message that even those in the highest level positions can be held to account for grave crimes,” said Elise Keppler of Human Rights Watch. “Not since Nuremberg has an international or hybrid war crimes court issued a judgment against a current or former head of state. This is a victory for Sierra Leonean victims, and all those seeking justice when the worst abuses are committed.”

Taylor had pleaded not guilty to all counts, claiming in seven months of testimony in his own defense that he was a statesman and peacemaker in West Africa.

While judges convicted him of aiding and abetting atrocities by rebels, they cleared him of direct command responsibility, saying he had no direct control over the rebels he supported.