According to Mailonline, a 12-year-old boy was drowned in a bath of boiling water by their domestic staff, who disguised as robbers and raped his mother before killing both his parents in a violent house robbery.

Three men broke into the family’s home in Walkerville, Johannesburg, where they assaulted and shot dead Tony Viana, 53, and brutally raped and killed his wife, Geraldine.
They then tied up and gagged the sobbing boy, Amaro, and pushed him into a bath of boiling hot water to drown him, ‘because he would be able to identify them’. ….. picture of the family and criminals when you continue. 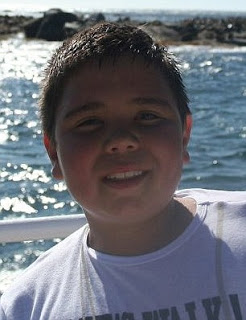 David Motaung, 20, pleaded guilty on Tuesday to robbery charges. They then left the South African court and walked back their cells laughing, according to Beeld newspaper. The family dog was killed by having his stomach cut open. 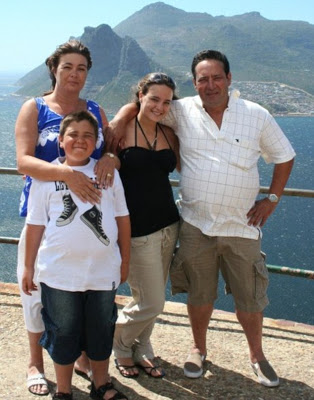 The men’s lawyer told Vereeniging Regional Court that they had broken into the house to steal and to get revenge for the way they had been treated by 42-year-old Mrs. Viana, their employer.

The court heard that Mr. Viana arrived home at the house to be attacked with a golf club and a machete-like ‘panga’ and ordered to open the family’s safe.

He was tied up and his wife and son, who arrived shortly after, were tied up in separate rooms.

Mbele then raped Mrs. Viana while Radebe helped restrain her by standing on her face before raping her too. They then shot her with her husband’s gun before shooting him in the head too, reported praag.org.

The accused admitted they then realized Amaro would recognize him. 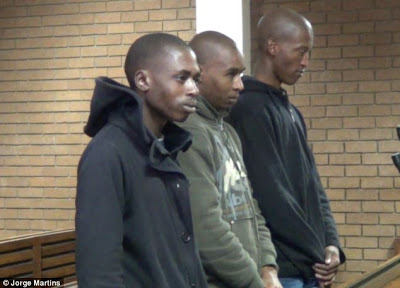 ‘We went to the bathroom and turned on the tap. We went to [Amaro] him and gagged him because he was crying. We forced him into the bath face down, knowing that he would drown.’

According to Beeld, Mbele and Radebe admitted guilt on charges of burglary with the intent to steal, robbery with aggravating circumstances, the possession of an unlicensed firearm, the illegal possession of ammunition and intentional damage to goods.

From forensic evidence tendered in court, it was clear that the boy was held down in boiling water. However, state pathologists have not determined the exact cause of his death. The boy’s hands and feet were tied.