Nigeria’s wedding industry has been booming for some time now with extravagant displays, lavish spending and huge guest lists. CNN recently featured the Nigerian wedding boom on Inside Africa. Check out some excerpts below: London (CNN) – Weddings in Nigeria are colorful, creative and extravagant productions, with guest lists of up to 2,000 people considered standard. “In England, if you had 400 people at a wedding, that would be considered a huge number,” bridalwear and couture designer Yemi Osunkoya said. “In Nigeria, if you had 400 guests, people would say ‘Oh, dear,’ ” he continues. “The more (people) you have there, the more friends it seems you have.” Osunkoya should know. With his wedding gowns highly sought-after by Nigerian brides, he attends about 15 of his clients’ weddings in Nigeria each year, and his London-based label, Kosibah, is at the heart of that country’s booming wedding industry. Last month, it was one of 129 businesses exhibiting at Lagos’ Wed Expo exhibition, which drew 10,000 attendees over two days. “I would say weddings are one of the fastest growing industries in Nigeria right now,” said the event’s organizer, Akin Eso. “A lot of people term it that they’re ‘going into events’ — but the money is really in the wedding industry.” The publisher of Wed magazine, a wedding-focused title that launched in Nigeria last year, Eso said the typical Nigerian wedding has evolved in recent years into a high-concept “production.” “There’s always been this joy around weddings, but now there’s also this whole creativity: It’s more like a production, and nobody knows where it’s going to stop,” he said. “People just imagine it and make it happen.” Themes such as a “snow wedding” would involve decorating the entire hall to match the concept, he said. “Ten years back, you would normally do all the arrangements for the wedding yourself or with your friend,” he said. “Now, for every aspect of the wedding there’s a vendor that can help you.” The trend has been driven by the many young Nigerians living overseas, who had introduced ambitious ideas for wedding themes, along with the concept of the wedding planner: a professional event organizer who could realize the happy couple’s vision for their big day, typically at their parents’ expense. Osunkoya said families typically put much effort and expense into the event, as a wedding was an important status symbol — although “not in a negative way.” “It’s showing how well you’ve done, and for the bride and groom, this is their time,” he said. “Most times in Nigeria, the parents take care of the wedding — and there are many weddings where it’s just a blank check,” he said. “It s a thing of joy to have your children married, so most of the time, the parents want to go all out. That’s where you see total creativity.” UK-based makeup artist Lola Ibekwe caters specifically to Nigerian weddings and has been hired by brides who fly her, all expenses paid, to Nigeria for their weddings. She said, “Nigerian brides really know what they want and demand the very best. Some of them have been influenced by the big weddings of Hollywood stars and don’t mind spending big to achieve the perfect look on their big day. Most of the brides I work with reserve a big part of their budget for makeup because the pictures will last a lifetime.” Timbuktu’s treasure at risk from armed uprising There are two parts to a Nigerian wedding, Osunkoya explained. The first ceremony was the “traditional wedding,” sometimes also referred to as the engagement. This was typically attended by fewer guests — only family and close friends — and may be held in area that one of the couple originally hailed from. The couple would wear traditional dress, with the bride usually wearing a traditional fabric gifted to her by her new parents-in-law, sometimes sewn into a modern Afrocentric design. The second, “white wedding” — with a guest list at the reception potentially running into the thousands — could follow days or even months later. For this, the bride would wear a white bridal gown and the bridal party formal attire. The most popular time of year for weddings was in December, when expatriate Nigerians return from abroad and can face a schedule of weddings seven days a week. Another distinctive feature of the Nigerian wedding was the wearing of “aso-ebi.” The phrase, which translates from the Yoruba language as “clothes of the family,” refers to the garments of matching fabric worn by the bride’s family and friends at the ceremony. “You’ve got 2,000 people there, so it’s a way of spotting people you’re meant to be with,” said Osunkoya. Although, in recent years, it is not uncommon to see the entire party wearing the aso-ebi. While there are occasional grumbles that the trend for elaborate weddings had gone too far, nobody seems to mind on the day. “Not everyone is equal or has access to the same amount of wealth, but everyone aspires to it,” Osunkoya said. 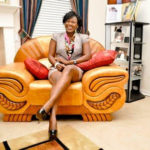