The arrest of Nigerian Smith Nnamadi, 34,
at a Bangkok department store, came after a woman, whose name was withheld,
complained to police that he had allegedly lured her to send him money under
false pretences. The woman claimed that she knew the suspect via Facebook
under name of Joe Henry, a British. They became lovers and Nnamadi proposed
marriage after chatting via the network for two months.

The suspect claimed he wished to bring in a Bt3million
dowry but could not afford the fee of Bt321,560, so he asked her to help. The
victim wired him Bt74,560 but Henry said he needed more. That made her
suspicious and she turned to the police. A sting operation was set up
at a local mall, where the Nigerian suspect came to pick up the
money.

The police investigation found that Nnamadi conspired with other
foreigners to lure Thai women, wanting foreign husbands, via MSN, Facebook and
online websites to dupe them into sending money. Police will hunt for his
accomplices.
….Awwww and the dude might probably been singing ”maga don pay shout halleuya, oh oh oh” 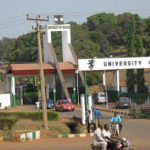