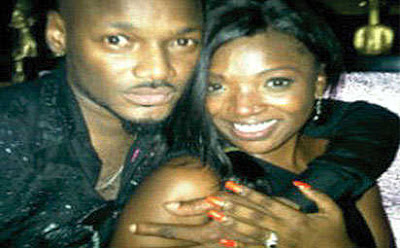 Tuface Idibia on Tuesday night reassured his fiancee, Annie Macaulay of his undying love for her    when he brought the actress on stage at his ‘Buckwyld and Breathless’ concert which took place at the Expo Hall of the Eko Hotels and Suites.

The pop icon was in the middle of performing his evergreen love ballad ‘African queen’ when Annie appeared on stage, sitting on a chair, backing the audience


2Face then approached her, handed her a bouquet of flowers and an Uvie crown, made of beads, similar to the crowns queens in the Benin kingdom adorn.

He then brought her towards the stage, as the audience applauded while Annie beamed a wide smile.

It is not the first time Macaulay, who featured in the original ‘African queen’ video, will join Idibia on stage to perform the song.

The pair have been inseparable since, even briefly holidaying in the US in March. None of Idibia’s other baby mamas  or any other woman for that matter  has been seen around the bestselling singer, since he proposed to Annie. There are indications that their wedding will happen in a matter of months.