I just received this –

“Is there any way of getting confirmation
about news I’m just getting that the Dana plane was distressed for a while but
could not make an emergency landing because the airspace was closed for 2 hours
for the Presidential Jet carrying Dame Patience Goodluck
Jonathan.

Private jet owners who had to hover in the air same time leaked
this. This was apparently the reason local news didn’t report the crash for so
long till CNN and foreign news stations started reporting it.

Local news
was ‘blacked out’ trying to kill the story of the airspace being closed while a
distressed plane couldn’t land……….I experienced the Patience Jonathan road blockage in lekki, so i can authoritatively confirm she was in lagos and infact lekki,. Meanwhile eye witness accounts said the airplane was infact flying around in circles for hours. continue reading jare.

It would be shocking if so. Though there
was engine failure there was still time for the plane to have landed
apparently.

You do know anyway that the airspace is closed for up to
2hours each time the Presidential Jet needs to go into the air? 2 hours for a
15minute take off or landing!

And this jet is used by President, VP,
President’s wife and if I recall David Mark.

The truth remains that the President’s wife was actually in
Lagos to attend the christening of their personal assistant’s child at the
Oriental hotel.. Lekki. Anyone living on the Lekki axis saw first hand the
horrendous traffic caused by the president’s wife’s visit..and confirmed reports
from airport staff who volunteered information, collaborated this fact, that the
Lagos airport was actually shut for 2 hours, about the same time the ill fated
Dana Plane crashed.

This also strongly explains the reason why Aero contractor
airplane could not depart Abuja for Lagos at 3:40pm because of the closure of
the Lagos airport. This is criminal and one can only imagine the deep sorrow
ad-in-finitum (without limit) that the families of these unfortunate Nigerians
and other nationals are currently plagued into. Grief that is so thick in the
air, that one can cut through with a knife…rooted soul searching.

Yes we have
to and yes we can; beginning from our immediate homes and While we pray
for the repose of the souls of the departed, we need as a nation to thoroughly
do some deep ommunities.. with time this will snowball into our National
consciousness. For how long are we going to sacrifice the lives of our dear
brothers and sisters and by extension mortgage the future of their/our children,
just for the comfort of our leaders? For a 15 minutes ritual of plane take-off,
an airport was shut for 2 hours because our “DEAR FIRST LADY” was scheduled to
return to Abuja.. OH merciful God, help Nigeria in
Distress!”

NIgerians need to know what happened?who closed the
airstrip for two hours on sunday june 3,2012???? 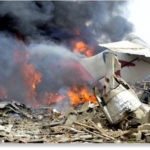