Alhaja Monsurat Olumuyiwa, mother of popular talking drummer, Ara, says bringing up the performer was a unique experience. During an edition of the on-going Supermom
reality TV show, she disclosed that Ara had always shown her love for
music, and even used to sneak out of the house to go to studios.

On a certain night, young Ara wasn’t
home at the expected time and she was forced to, in company of one of
Ara’s brothers, go  looking for her at a studio they knew she always
went to. On the way there, they were flagged down by people they thought
were policemen, only to discover they were suspected gang
mates of alleged cannibal Clifford Orji alias OTOKOTO

She continued, saying how shocked she
and her husband were when Ara informed them of her decision to drop out
of school to pursue music, ‘All her brothers are graduates; she was
the only one who said she was dropping out of school to concentrate on
music. I and her father could not reconcile with that because she could
have acquired whatever degree she wanted but Ara chose music’ she says.
Monsurat added that she knew Ara to be
an unusual child when she started walking at seven months, something she
thought was strange, ‘I would strap her to my back so that people
wouldn’t see her walking and start asking questions. But I thank God for
what and who she is today’ she concluded.
Ara, who is from Ondo State, is popular
for being Nigeria’s most prolific female talking-drummer, and is a
holder of the Freedom Key to Miami-Dade County, USA.
She has performed for the Queen of England and President Bill Clinton at different banquets alongside global music icons such as Stevie Wonder and Wyclef Jean. 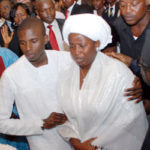