The Chairman of the Federal Road Maintenance Agency, Ezekiel Adeniji, has said that the Federal Government will soon reintroduce tollgates to federal roads across the country.

Tollgates were scrapped by former President of Nigeria, Olusegun Obasanjo
during his tenure. However, since his exit in 2007, there has been
reports that the government was considering the return of tollgates to
federal roads. This is likely especially as some states like Lagos have
successfully introduced such on their roads.

The FERMA boss also said the agency would recruit 10,000 Nigerians
from communities where it would be engaged in major road maintenance
work before the end of the year.

In an interview with Economic Confidential,
Adeniji did not give a specific date for the reintroduction of
tollgates, but he said that tolling is for revenue generation and job
creation.

“In developed countries, there is no place you go to that you don’t pay toll for the roads you use.

“If you are paying for water, electricity and communication, why
can’t you pay for good
roads? Tolling is universal. But the government
that scrapped the tolling knows the reason why they scrapped it, and we
also have reasons why we want to return it. It is as simple as that.

“Because when you toll, you get more revenue, you create more jobs and you have funds to maintain the roads.”

What do you think about his statement? Would it be wise to
reintroduce tolling on all Federal roads in the country? Do you agree
that reintroducing tolling on the roads would create more funds to
maintain the roads? 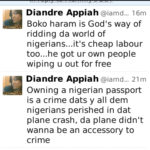