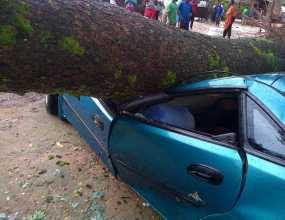 This
might not be good times for the people of Niger State as barely one
week after flood killed two brothers in Minna, the state capial,
disaster struck again as this time, a tree fell on a major road in the
capital city during a two hour heavy downpour and killed the Legal
Adviser to Niger State Chapter of Congress for Progressive Change (CPC),
Barrister Joseph Kolo.
Eye
witness said the 40 year old barrister
arrived from a journey during the rain and decided to park under a tree
while waiting for the rain which had made movement difficult, to
stop, only for the tree which was supposed to shelter him from the rain
fell on top of his car killed him instantly.
However, the remains of the late barrister has since been deposited in Minna General Hospital morgue. In
trying to play safe and park his vehicle for the rain to stop so he can
continue his journey, Barrister Kolo was killed. If you must stop
driving during a heavy downpour especially the type that makes it
extremely difficult for you to see clearly ahead of you, please, find a
spot that is neither close to a forest or bush area, trees or on a
bridge, and park. 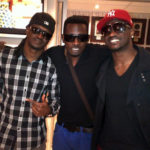 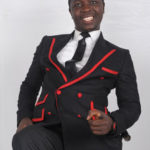