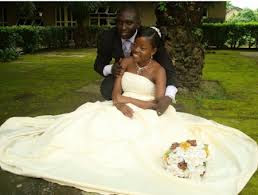 RENOWNED Lagos pathologist, Professor John Oladapo Obafunwa on Monday (yesterday), while testifying as a prosecution witness in the ongoing trial of a youth pastor, Akolade Arowolo who was alleged to have murdered his wife, a staff of Skye Bank Titilayo Omozoje.

Mr Obafunwa stated that during the autopsy, he discovered that the late banker had a minimum of 76 stab wounds that were inflicted on her by someone else…..(When they incident happened early last year, i haven’t started blogging then, but you can read the story at the end of this article)….click read more below
Professor Obafunwa, who was being led in evidence by Mrs Olabisi Ogungbesan, the Lagos State Director of Public Prosecution before Justice Lateefa Okunnu of a Lagos High Court sitting in Ikeja, testified that there was a concentration of stab wounds from her chest to her abdomen on the left side.
According to the pathologist, he conducted both external and internal examinations of the deceased’s body during autopsy, adding that he noticed multiple stab wounds and some incised wounds involving her chest, arm and abdomen.
He further revealed that during his internal examination of the body, he found various wounds consistent with wounds from sharp weapon with a single edge blade as well as a double edge blade.
The wounds, he stated, affected the left eye, right eye, upper chest area, right chest and the collar bone left armpit also included a 10 x 5cm rectangular area that has multiple individual injuries on the left side of her chest and breast overlying the heart.
Professor Obafunwa, who supported his testimony with slides of pictures on a Compact Disc stated that the autopsy revealed a gaping wound which was revealed as a black hole in the chest region.
According to him, the chest wall was lost due to multiple stab wounds, there was a damage to the diaphragm, left side of the liver, breast area and repeated stab wounds to the lungs and injuries.
The professor revealed further that his forensic investigations revealed that the injuries could not have been self inflicted as the penetration was from the chest to the back and there were stab wounds to the stomach wall.
The final result of the autopsy, according to him, is that the death was caused by multiple injuries in the chest and abdomen due to multiple sharp and long force trauma.
He also identified an alleged weapon which he confirmed was consistent with some of the wounds on the deceased’s body.
Speaking on his examination of the deceased’s husband, Professor Obafunwa stated that there were wounds on his hand and abdomen and he also had a limping gait which he admitted may be because he jumped to the ground from the fourth floor.
He, however, added that the 12 injuries he examined were not penetrating but superficial and two of them might fall into the category of defence wounds, though not all the injuries fall into the time frame the incident was said to have occurred as they might have been on the body earlier.
In reply to Olanrewaju Ajanaku, the defence counsel’s allegation that the pathologist was the one that inflicted the stab wounds on the deceased when the corpse was in his custody, he asked how he could do that when he was not insane.
The case was adjourned till October 22 for further hearing and the prosecution is expected to take its last witness.
If you missed the story when it happened, refresh your mind below
Prior to his arrest, we gathered that some policemen had flagged down Kolade’s car around Aye Bus stop, Isolo and quizzed him on account of the bloodstains on his clothes but he tricked the policemen and escaped.

The source said, “Kolade escaped on Friday after the murder when some policemen apprehended him somewhere around Aye Bus Stop. He was covered in blood and even passersby thought he had been involved in an accident.

“When they stopped him and started quizzing him, Kolade collapsed on the ground pretending to have fainted. As they were making efforts to revive him, he immediately got up and rushed across the road,nearly killing himself in the process because he was knocked down by a car. To the surprise of those present, he just picked himself up, boarded a bike and fled. Kolade’s car was immediately seized and taken to the Aswani Police Station, Isolo.”

Another source at the SCID told one of our correspondents that when Kolade was quizzed, he simply said, “It was the devil’s handiwork.”
The Police Public Relations Officer, Lagos State Command, Mr. Samuel Jinadu, confirmed Kolade’s arrest to our correspondents on the phone, adding that investigations were still ongoing.

At the residence of the couple, a neighbour, who spoke on condition of anonymity, said the Arowolos had frequent quarrel, which often resulted in fights.

The source said, “I cannot say for sure what led to her murder. I was aware they fought frequently but because it rained heavily that Friday morning, I don’t think anyone heard their noise. The next day(Saturday), her body was discovered; I came back from an outing to meet a huge crowd on the street. I was shocked to learn that Titilayo had been murdered by her husband. Although they had frequent fights, no one expected this.

“I never really had cause to relate with Kolade because I live with a sibling who rented this flat. I was surprised to learn that Arowolo was married because he frequently brought in different girls every day to his flat. As a result, I never knew who his wife was.”

The source also described the murder scene as gory, saying “Arowolo was stabbed severally in her chest and her eyes gouged out; in fact, her husband mutilated her. I couldn’t even bring myself to look at the pictures some of the neighbours took with their phones.”

Another neighbour said, “I don’t live here, although I run a business on this street. I learnt that the man murdered his wife and escaped after dropping off their two-year-old daughter at a day care centre.

When the parents did not come for the child, the day care employees were worried and came to look for them. There was no one at home and it seemed none of the parents could be reached. Matters came to a head the next day when a putrid odour was coming out from the Arowolos’ flat. I don’t know if it was the neighbours or the day care employees that called the police but they just came here and before you know it, a crowd had gathered.”

At Skye Bank, Marina branch, where Titilayo worked until the time of her murder, her colleagues were still mourning.

One of Titilayo’s colleague, who was recently transferred, told Punch that the deceased was hardworking and was reportedly due for a promotion.

Describing her relationship with the deceased emotionally, she said, “I’ve known Titi for more than three years. Titi was working at Skye Lounge Victoria Island. She was later transferred to Adeola Hopewell before joining the Marina branch over a year ago.

“She joined Skye bank around 2007 and I can tell you that she never received a query from the bank. That is to show you how committed she was to her job.”

Although she said there were times Titilayo came to office with injuries, the source said nobody suspected that she was being abused because she did not discuss her problem with her colleagues.

She said, “There was a day she came to work in bandage but when I asked her how she sustained injuries, she said she fell from an okada.

“Two weeks ago, another colleague saw marks on her hands but when asked how she got the bruises, she said she slipped and fell in the house.

“It is now that I’m beginning to connect the dots. Titi was small in stature and her husband was big. I can only imagine the sort of beating he would have been giving her. I regret not noticing on time.

Probably, we would have been able to avert this disaster.

“Titi was so in love with Akolade. On many occassions, she would distribute copies of Akolade’s Curriculum Vitae to colleagues in the office because she was eager to see him get a job.

“Akolade, however, never appreciated her. Sometimes, he would seize her cheque book, ATM cards and her car keys as punishment whenever they fought even though she was the one sustaining the family financially.

“Titi was very happy last Thursday because her leave would start on Friday, which happened to be her husband’s 30th birthday. She said this period is for ‘me and my husband.”

The source told our one of our correspondents that Titilayo was extrememly close to her father having lost her biological mother at a tender age. This was why she always visited her father every week.

“I suspect that Akolade must have been targeting her leave allowance which was over N250,000 that she had just received the previous day. Also, I think he was her next of kin in all her official documents and he had a lot to gain from her death,” the source added.

Meanwhile, a page has been opened for Titilayo, Facebook. The page titled “RIP Omozoje Titilayo Oyakhire” and opened on Monday by her friends had been a washed with messages of love, and condolences and curses on the suspect.

Meanwhile, Titilayo’s corpse has since been deposited at the Lagos State University Teaching Hospital’s mortuary, Ikeja. Funeral plans are yet to be announced. 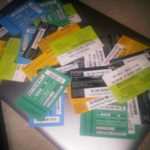