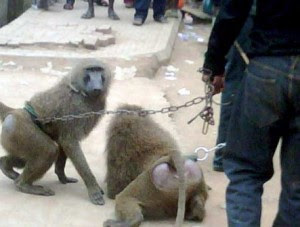 There was a mild drama at the weekend when the police at Ikotun Division, Lagos State, Southwest Nigeria, arrested three monkeys and their minders suspected to be Fulani herdsmen for allegedly using the monkeys to breach public peace and to steal.  They were arrested at the popular Ikotun roundabout.
But the monkeys shocked the police and resisted being forced into the station. They stood at the entrance where they continued their usual demonstration and acrobatic displays. The policemen who arrested them became angry and threatened to shoot the monkeys….Hahahah what do you expect when you leave human beings to arrest monkeys?…Nigerian Police ehhhh…..continue reading
The drama stirred up confusion because a large crowd gathered at the entrance of the police station to watch the moneys display.
The Ikotun Police Divisional Police Officer, CSP Akika later came out of his office and intervened.
He released the moneys to their owners and dispersed the crowd at the station.
P.M.NEWS learnt through the residents that whenever the monkeys and their minders were in Ikotun, a large crowd usually gathered to watch them display. But criminals seized the opportunity to steal from the onlookers and passers-by pickpockets usually have a field day during such displays.
Before the monkeys were arrested on Friday, a victim, Nurudeen Idowu complained to the police that when he passed through a crowd watching the monkeys, he lost N5,700 he had on him.
He said he suspected that the monkeys’ minders were collaborating with criminals to steal from the people.
Another victim, Mrs. Victoria Udoh, claimed she lost N22,000 when she joined the crowd to watch the monkeys display, lamenting that she could not tell her husband how she lost the money. A trader in Ikotun market, Edwin Chris, also claimed he was a victim. He said his N9,000 was stolen as he watched the monkeys during the week.
P.M.NEWS