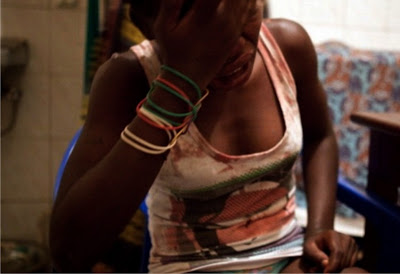 A single lady believed to be in her early twenties has been raped to an unconscious state by four friends around Cemetery Road in Warri, a popular town in Delta State.
The victim, who is now battling for her life in an undisclosed hospital, was said to have boarded a taxi cab with four male passengers from Odion Road to her residence in Aguowe Street, Off Mac Demot Road.
The driver suddenly took a different direction towards Cemetery Road to the chagrin of the victim. The victim said she challenged the driver of the taxi but the other passengers drew a dagger and threatened to kill her if she raised any alarm.
They, thereafter, drove down to a storey building on the Cemetery Road where the miscreants had a field day raping the victim until she became unconscious.
However, luck ran out on them as the matter was reported to the Quick Response Squad of the Delta State Police Command in Warri, who swung into action and arrested three suspects – Akpofure, Seih and Obrakpo – all of Nos. 24, 64 and 66, Cemetery Road, Warri.
Public Relations Officer of the command, ASP Famous Ajieh, who confirmed the arrests in Asaba yesterday, stated that the police were currently on the trail of the fourth suspect, one Ebeme.
Ajieh said the arrested suspects had confessed to the crime, adding that one Black Berry phone used by the suspects in recording the rape action was recovered.

Reason Why Selena Gomez Dumped Justin Bieber Revealed: – He Got Texts From Other Girls