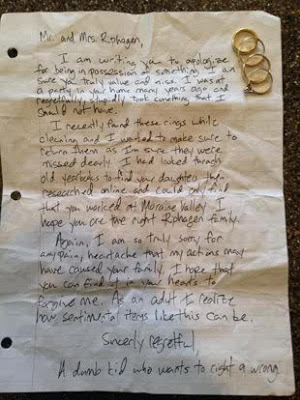 Funny story! Imagine a thief in Naija returning your stolen property after 15 years and even including an apology letter!
The old saying, “Better late than never,” rang particularly true for the Riphagen family of suburban Chicago. The Riphagens had four gold rings returned to them, along with an anonymous letter of apology, 15 years after they had been stolen.
Margot Riphagen, 31, who now lives in Portland, Ore., recalls exactly when the rings were stolen. She was only 16 years old when she had a party that got a bit out of hand. A few items were stolen, most notably those four rings.
Courtesy Margot Riphagen “It was a long time ago and it was a pretty bad situation,” Riphagen told ABCNews.com. “I invited a few friends over and then all of a sudden there were all these people there I didn’t know. We immediately noticed stuff was missing. My parents actually turned me in to the police. They always understood this wasn’t my fault, but we had never recovered those rings and I still have no idea who it was.”
The anonymous note, signed by a sincerely regretful “dumb kid who wants to right a wrong,” was sent to Riphagen’s mother at her place of work. The family was astonished to have the rings returned, and Margot said she doesn’t even care who stole them. The only thing that matters now is that they’re back.
“We don’t care who it was. I was stupid when I was 16 and I’m sure they were too. Somebody did it for the thrill of it, not for money,” Riphagen said.
For this surprised family, the four rings had more sentimental value than anything else.
“The first ring is my mother’s actual wedding band, that she was not wearing because she was going to get it re-sized. The second is a ring with a small diamond that my father gave my mother when my sister was born, who is a year older than I am,” said Riphagen.
“And then the other two, I actually didn’t know existed until we got them back, but they are my grandparents’ wedding bands. They had small diamond chips put into them for me and my sister when we got older. So it was a pretty big deal. I’m now actually wearing my grandfather’s wedding band.”
Riphagen said she’s felt badly about the missing rings for 15 years now, and finally with the help of this letter, has some closure.
“We never thought we would get any of the stuff back. It’s completely amazing and wonderful and we’re all thrilled about it. It’s a super-positive thing and a great way to start the New Year,” she said.
Source- abc News

Related Topics:Margot RiphagenNewsPHOTOSPEAKSthief returns stolen rings with an apology letter
Up Next