In what can be described as a modern day miracle, a mum gave birth to two sets of male identical twins on the same day. The woman identified Tressa Montalvo welcomed the boys by Caesarian section at The Woman’s Hospital of Texas in Houston on Valentine’s Day.
Ace and Blaine were born at 8.51am weighing 3lbs 10oz and 3lb 15oz and Cash and Dylan arrived just a minute later – hitting the scales at just 2lbs 15oz and and 3lbs 6oz.
Tressa, 36 and her husband Manuel Montalvo Jr. have been trying since last last year to give their two-year-old son Memphis a little brother or sister….continue to see Tressa’s picture

The mum-of-five said: “No fertility drugs were used. We planned the pregnancy – I guess we just succeeded a little too much!”
The couple were first told they were expecting twins when Tressa was 10-weeks pregnant.
The next time she visited her doctor, a third heartbeat was detected – and then a fourth.
After further scans experts told the Montalvos their babies weren’t quadruplets, but two sets of identical twins – each set sharing one placenta.
The couple beat amazing odds of 70 million-to-one to have two pair of identical twins on the same day. 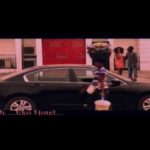