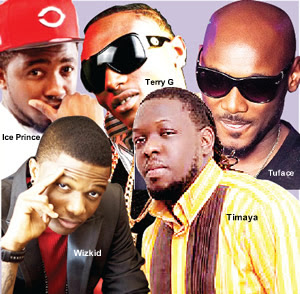 Interesting article i culled from Punch.
As award-winning, singer Tuface Idibia, exits the singles club, the world is watching the lips of some other ‘eligible’ artistes. Singer Innocent Idibia, aka Tuface, will happily tie the nuptial knots with his heartthrob of many years, Nollywood actress Annie Macaulay in Dubai on Saturday (tomorrow). For the couple, who are both stars in their own rights, the much-vaunted wedding is the climax of a relationship that has somewhat managed to survive many storms and crises.
Before Tuface made the all-important decision to walk down the aisle with Annie, many music fans had literally concluded that he was not marriageable. With about five children from three women, most single ladies had stopped dreaming of grabbing him for keeps.
For a while, the talented singer was the butt of many jokes rolling down the lips of every stand-up comedian in the country. Some of them even referred to him by funny pseudonyms. They called him ‘Father Abraham’. But all that now belongs to the past.
As the hour draws near, Tuface and his bride will be counting their blessings and looking forward to a future filled with marital bliss. Unfortunately the same cannot yet be said about his colleagues who have yet to summon the courage to quit bachelorhood.
Interestingly some of these artistes are currently walking the same path that Tuface has just abandoned.
It is no longer news that the likes of Timaya, Terry G, Ice Prince, Wizkid and MayD have been weaving in and out of relationships with women. They seem to have many things going for them: they are young, famous, rich and enjoy lots of goodwill from music fans across the country. The only snag is that they seem to be contented with making babies without getting married to their mothers.
A few months after Timaya’s romance with Empress Njamah packed up, the dreadlocked dancehall star found happiness again when his girlfriend, Barbara, was delivered of a baby girl.
The new baby came as a huge relief to the singer who had been clearly worn out by the emotional stress that followed the breakup of his affair with Empress. He was so overjoyed that he sent a message to his fans on Twitter, announcing the birth of the child.
But Timaya surprised many music fans who had expected him to marry the mother of his daughter. In an interview with E-Punch last year, he made it clear that marriage was not in his agenda.
“I wanted to have a baby by Barbara because she is my kind of woman; the kind of woman I’d like to spend the rest of my life with and this was why I decided from the outset that I’d go the whole hog with her. But she knows that marriage is not something we will dabble into now.
“Marriage comes with a lot of responsibilities which are beyond financial or material things. God has blessed me with everything a man needs to have a successful married life and you can bet that Emmanuella and Barbara will get the best of everything money can buy but, personally, I don’t feel ready for it,” he had said.
Also in November, 2012, Terry G’s fiancée, Mimi, put to bed a baby boy in London. It was a double blessing for the baby daddy who had just moved into his own house at the Iju-Ishaga area of Lagos.
But, while Terry G had taken the first step towards solemnising his relationship with his lover, Chocolate City rapper Ice Prince and Wizkid appeared to be too busy trying to weave their way through a maze of starry-eyed female admirers.
One starry-eyed girl named Bimbo Babatunde was eventually delivered of a baby boy in March, 2012 and Ice Prince (real name Panshak Zamani) is said to be the father of the child.
Although he kept denying it, Wizkid was rumoured to have fathered a baby girl. Sources said the evidence that he might have joined the league of ‘baby daddies’ lay in a picture of himself and a cute baby girl that he hung in the living room of his new home in Lagos. But the artiste is reluctant to tell.
Apart from that, Wizkid was at one time said to be deeply involved with controversial actress, Tonto Dike.
Now that Tuface is finally calling it quits with a stormy bachelorhood, the question is: will the others now waiting in the wings follow in his footsteps? Only time will tell.
Source: Punch Nigeria

PHOTO: Aki And Wife Spotted Together At A Function In Lagos