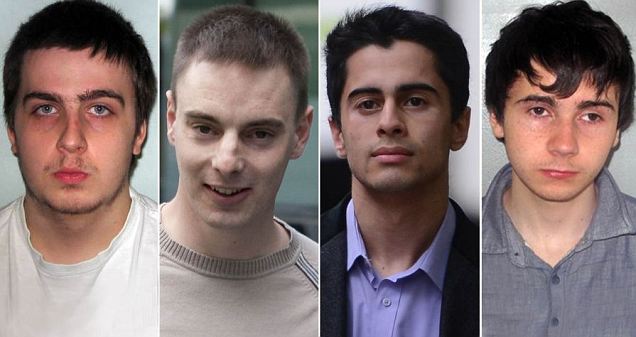 A gang of hackers who attacked computers at the Pentagon and Nato for ‘laughs’ were jailed yesterday for their campaign of havoc. The four British hackers acted as ‘latter-day pirates’, crashing computer systems and stealing confidential data including passwords and credit card details.
Southwark Crown Court heard the four were lonely, isolated young men when they turned to the internet.
Once inside internet chatrooms, they were seduced by the status afforded to practitioners of so-called ‘hacktivism’.
Three of the hackers were teenagers, the youngest only 16, yet they attained celebrity status on the internet, where one bragged: ‘We are gods now.’
They boasted about their ability to attack high-profile targets, including Sony, the FBI and the UK’s Serious Organised Crime Agency.
Judge Deborah Taylor jailed three of the four conspirators but gave the youngest a suspended sentence after hearing the A-level student was about to go to university.
She said: ‘You each played your role during a seven-month orchestrated and sophisticated campaign of dissemination of data.
‘You used your technical abilities to cause substantial loss – in some cases catastrophic, financially and personally – all for your own personal amusement and to feed your sense of power.’
The four men, who included student Mustafa Al-Bassam and Iraq veteran Ryan Ackroyd, left a multi-million-pound trail of damage from their hacking operations.
Working from their bedrooms, often in their parents’ homes, they accessed the confidential details of 26.4million Sony customers and 74,000 would-be X Factor contestants in the US. They released police officers’ personal details onto the internet after an attack on Arizona state police and another raid left the website of Britain’s Serious Organised Crime Agency disabled for 12 hours.
The hackers, who called themselves LulzSec, attacked their targets out of ‘simple audacity, if not arrogance’, the prosecution said. The group even asked its Twitter followers to nominate high-profile targets.
‘Theirs was an unusual campaign in that it was more about promoting their own criminal behaviour than any form of criminal financial profit’
Detective Superintendent Charlie McMurdie
Cyber raids were organised in a wave of attacks nicknamed Titanic Takedown Tuesday, Wipeout Wednesday and F*** FBI Friday.
Prosecutor Sandip Patel said the gang had displayed extraordinary computer skills but added: ‘These defendants acquired destructive tools to use on the internet. They are at the cutting edge of a contemporary and emerging species of international offending known as cyber crime.’
The four men – Ryan Cleary, 21, Jake Davis, 20, Ackroyd, 26, and Al-Bassam – admitted a series of charges relating to the conspiracy. At the time of the attacks, Cleary was 19, Davis was 18 and Al-Bassam was 16.
The conspirators never met but were members of the online group LulzSec, which used the motto ‘Laughing at your security since 2011’. Some attacks involved stealing users’ data but others simply hijacked sites.
A final mission statement left on the internet, written by Davis, said: ‘For the past 50 days we’ve been disrupting and exposing corporations, governments, often the general population itself … just because we could.’ Cleary, of Wickford, Essex, developed a sophisticated network of up to a million ‘zombie’ computers around the world which he could control remotely using a cyber code, a so-called ‘botnet’.
Now behind bars: Ex-soldier Ackroyd , of Mexborough, South Yorkshire, was jailed for 30 months while Davis  from Lerwick, Shetland, was ordered to serve 24 months in a young offenders unit
‘This case should serve as a warning to other cyber-criminals that they are not invincible’
Andrew Hadik, Crown Prosecution Service
He used them to co-ordinate ‘distributed denial of service’ (DDoS) attacks, where he could order the computers to bombard a target with requests for information, overloading it until it crashed.
Cleary, Davis and Al-Bassam admitted conspiring to carry out DDoS attacks.
All four defendants admitted a single charge of conspiring to target computers at Sony, 20th Century Fox, US broadcaster PBS, Nintendo, the NHS, Arizona state police and News International.
Asperger’s sufferer Cleary also admitted three charges of possessing indecent photographs of children as young as six months old.
He was jailed for a total of two years and eight months for the computer offences and will be sentenced for the photographs next month.
Ackroyd, of Mexborough, South Yorkshire, was jailed for two years and six months. Davis, from Lerwick in the Shetland Islands, was ordered to serve two years in a young offenders’ unit.
Al-Bassam, from Peckham, South London, was given a sentence of one year and eight months, suspended for two years, and was ordered to carry out 300 hours of unpaid community work.
All four are now subject to serious crime prevention orders which place severe restrictions on their use of computers.  CPS reviewing lawyer Andrew Hadik said: ‘This case should serve as a warning to other cyber- criminals that they are not invincible.’