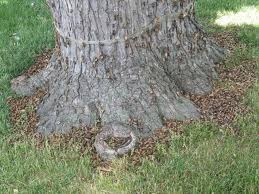 The Cathedral Church of Emmanuel Anglican Communion in Mgbidi, Oru –West Council Area of Imo state has become a pilgrimage site of sort as people from far and wide have converged on the premises of the church, to scoop water gushing out from the base of a tree that they believe, has healing powers.

Consequently, people of various faiths troop to the new miracle site daily ostensibly, for miraculous healing for their ailments.  At the church premises, both old and young men and women with plastic containers wait patiently on long queues, to scoop the miracle water.

and received her healing the next day. She further stated that another woman who had ulcer came to the church when she heard about the water and immediately she drank it, she was miraculously healed.

Another resident, Mr Onyekachi Ozoemene, told Sun that he suffered from severe stomach ache until he heard about the miracle water and came to the church. Onyekachi said that he got to the church on Friday evening but was able to access the water around 3am on Saturday because of the huge crowd that was there for the same purpose.

He testified that 30 minutes after he drank the water, he noticed that his severe stomach pain was gone.  Another visitor, Mr Ejiogu came all the way from Egwe community in Oguta Council area of the State and had arrived in the church premises in the early hours of Friday but got the water at about 9.30am.

She said that she believed that the water could indeed cure people of their ailments ward off evil attacks.  Speaking in the same vein, Madam Chinonye who waited patiently to fetch the water, told Sun that she was in the church to get the water for her sister who needs the fruit of the womb and that the water had been blessed by the priests.

She further stated that popular priest, Rev Father Mbaka, had prophesied during one of his crusades at the Adoration Ground that water would come out of a tree and that when that happened, people would go there for their miracles.

A member of the Christian Men Organization of the Catholic Church, Elder Ozor Fidelis Obioma, said he had to visit the scene when he heard that water was gushing out from the base of a tree at the Anglican Church in Mgbidi. Elder Obioma described the development as the wonder of God and a sign of peace.  However, the Bishop of the Diocese, the Rt. Rev Geoffrey Nwadioraoma, could not be reached for comments because he was attending the diocesan Synod.

“Professor Wole Soyinka Is An Embarrassment To Nigeria” – Patience Jonathan