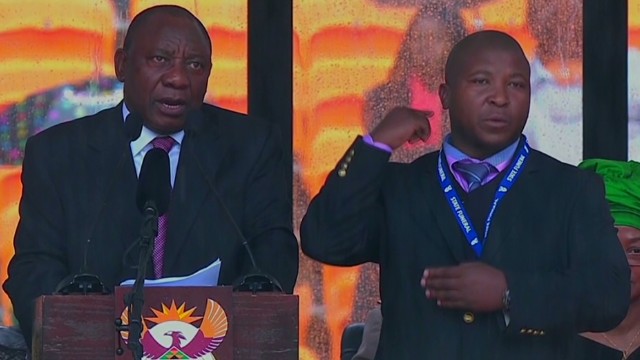 To those outside the deaf community, the sign language interpreter for Nelson Mandela’s memorial may have looked like he was working very hard, translating the spoken words into gestures for four hours.
But he was a complete fake, and his actions outraged deaf people around the world, according to an association for the deaf community in South Africa.
From CNN
The service to commemorate the revered statesman, who died last week at the age of 95, was broadcast to millions of viewers around the world.
While dignitaries addressed the crowd Tuesday at Johannesburg’s FNB stadium, the suited man with a security pass produced a series of hand signals that experts say meant nothing.
The Deaf Federation of South Africa (DeafSA) said the “interpreter” — whom it did not identify — was not a recognized professional, nor was he known by the deaf community in the country.
“The so-called ‘interpreter’ who interpreted at the official memorial service for late former president Nelson Mandela at FNB stadium has been dubbed the ‘fake interpreter’ and the deaf community is in outrage,” DeafSA said in a statement.
The man did not use facial expressions, which in South African sign language are an important part of communication, and the hand signals he used were meaningless, it said.
“The signs (self-invented signs) the interpreter used are not used in South African Sign Language and it is a total mockery of the language,” DeafSA said.
He also did not use the established, recognized signs for the names of Mandela, South African President Jacob Zuma and his predecessor, Thabo Mbeki, among others, DeafSA added.

“This proves that he is not involved in the deaf community and doesn’t know South African Sign Language,” it said.

“To the best of our knowledge, he has not undergone any formal training in South African Sign Language or Interpreting offered by any recognized institution which offers these training courses.”

South African government spokeswoman Phumla Williams said she could not immediately comment on the allegations.

“I am still trying to get the feedback from the people who hired him. I am not in a position to respond,” she told CNN.

“Once I have that information I will respond.” 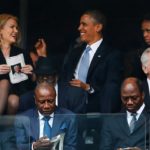