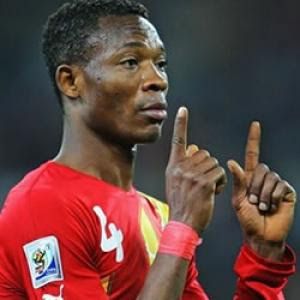 Black Stars defender John Paintsil has been arrested by police for stabbing his wife. This was confirmed by Greater Accra Police PRO Freeman Tettey in an interview with Joy News a while ago.
It is not clear the cause of the misunderstanding. Police describe the incident as domestic quarrel.  A freelance journalist Haruna Maiga who was at the Legon Police where John Paintsil is being held said the deputy Black Stars skipper was brought together with his three kids.
They were escorted by a group of police men, one armed.
Freeman Tetteh said Paintsil is being held for assault and causing harm.
The wife, Richlove Paintsil is reported to have jumped the Trasacco wall to her neighbour, ostensibly to escape the assault of the husband but Paintsil is alleged to have followed into the neighbour’s house and handed a few slaps to the man holding the wife.
The wife is said to be unconscious after sustaining serious injuries to her eye.
She is said to be responding to treatment at the hospital.
Paintsil was part of the Black Stars team that came fourth in the just ended 2013 Nations Cup.