An aspiring actress has been jailed for seven years after she mounted a pavement and used her car ‘as a weapon’ to plough into her former lover and his partner.
Sonita Claire smashed into Kevin O’Neill – the father of her child – and Mary Jane Kimble at 30mph, hitting them from behind as they walked hand-in-hand on a busy Derby street. The couple were thrown onto the roof of Claire’s Ford Fiesta before falling to the road 40 yards from where they were struck.
Mr O’Neill, 38, suffered a broken neck fractured vertebrae in his neck and a broken collar bone, while 33-year-old Miss Kimble sustained multiple cuts to her head and face and a broken collar bone.
Both were knocked unconscious and left in pools of blood.
The judge said that Claire ‘couldn’t cope’ with the fact her ex-partner ‘preferred another woman’, and that her actions had been brought on by ‘obsession and jealousy’.
The court heard how Claire, kitchen worker Mr O’Neill, and Miss Kimble had been caught in a ‘love triangle’ which had left Claire ‘bitter and hurt’. Mr O’Neill and Miss Kimble were going out together in 2004 when he had a short ‘fling’ with Claire. A year later he split from Miss Kimble and re-kindled his relationship with Claire – who gave birth to his son in 2006. But their relationship broke down last year, and Mr O’Neill and Miss Kimble got back together.
Mr Allan said that in the days before the offence Claire had confronted her former lover and hit him with an umbrella. She also contacted Miss Kimble and threatened to run her over. 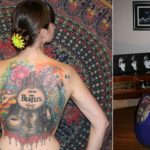