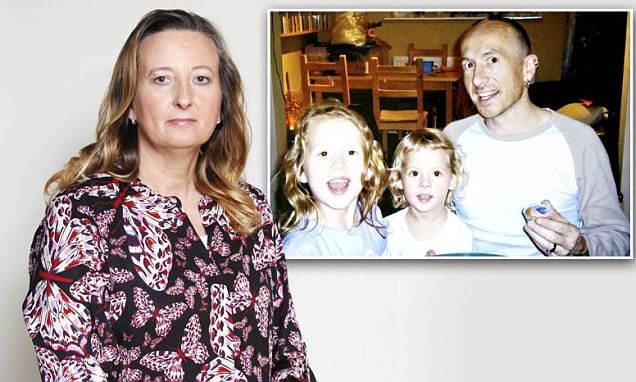 Spotted this long interesting article on DailyMail
Lesbian Mandy and gay Mark became friends after meeting at a club, he offered to donate his sperm twice when she wanted to be a mother. As a result, she had two daughters. He said he never wanted to be a father to the children, but he did play a part in their early lives visiting often as Mandy’s friend.
She now says he should act like their father and support them financially and took him to court.
The hearing took place in a tribunal office in Basildon, a humdrum backdrop to an emotionally charged dispute that shows no sign of abating after ten years.
Mandy Baker sat on one side of the room with her lesbian partner; Mark Langridge and his gay partner were on the other side. A representative from the Child Support Agency was placed diplomatically between them.
Mark is yet to make a payment and is considering whether to appeal again. But he is the father. Why doesn’t he simply pay up? Well, the definition of father is at the heart of this case.
As far as Mark, 49, is concerned, he is a sperm donor, no more than that, with no fatherly obligations or responsibilities towards the two girls.
Mandy, 50, sees things rather differently. Before Mark donated his sperm, she says, there was a very clear agreement between them that he would assume a traditional fatherly role.
For a few years, she says, he fulfilled his promise but then cruelly decided he didn’t like playing the role of ‘Daddy’ and severed all contact with his daughters. He hasn’t seen them for nine years.
Mark’s ‘rejection’ of his daughters, she says, has been devastating for them.
‘Mark wrote off the girls as though they were nothing. The novelty wore off. He’s got no conscience. I don’t know how he sleeps at night’ 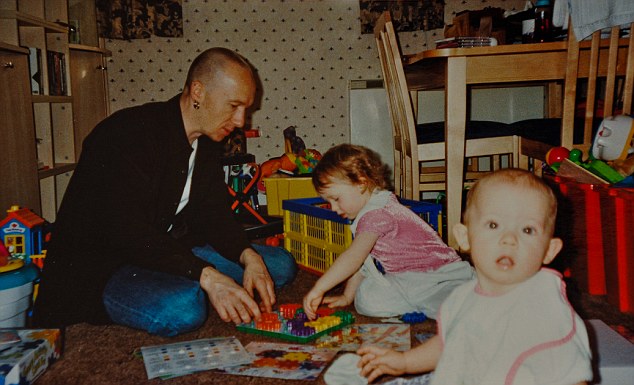 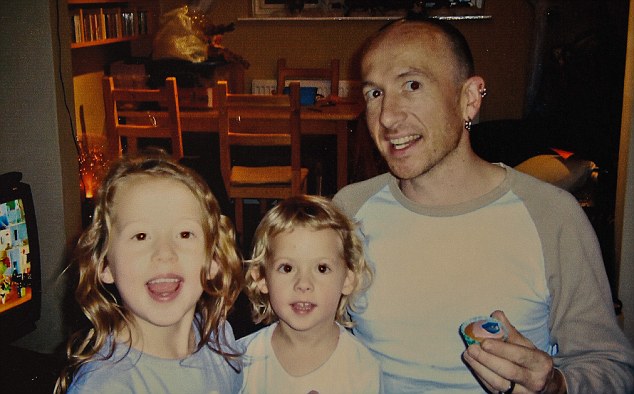 Mandy insists that by the time the girls were born, the relationship had ended, and Jackie was staying at the house as she recovered from cancer.
One day in January 1998, Mandy went to Mark and Shaun’s house in Laindon, Essex, and handed Mark an empty pill container. He returned it to her containing his sperm, and she completed the procedure with the help of a book called Challenging Conceptions – Planning A Baby By Self-insemination.
Mandy says Mark, a bookkeeper, was delighted when she told him she was pregnant. ‘He went down the pub to celebrate.’
‘As time went on, Mandy obviously decided she wanted her children to have a father, but that wasn’t the deal’
Ri’anna was born on November 10, 1998, and Mark and Shaun visited mother and baby a few days after she returned home from hospital.
‘I’ve visited lots of friends when they have babies,’ says Mark. ‘Shaun and I were there as Mandy’s friends.’
Mark and Shaun visited Ri’anna about once a fortnight, ‘as friends’ and when Ri’anna was five months old, he agreed again to donate his sperm. Shannon was born on March 31, 2000.
Mark’s name isn’t on either of the birth certificates. He says that’s what Mandy wanted. She says he dragged his heels about coming to register the birth so she felt she had no option but to leave it off.
By now, Mark and Shaun were visiting around once a fortnight, despite Mark’s family’s misgivings. Mark says his parents foresaw ‘trouble’ when he told them he’d entered into a sperm donation – but, nevertheless, his father and stepmother, and his mother, also began visiting the toddler and baby sister. There were even family picnics, barbecues and outings to ice shows with Mark and Shaun, says Mandy.
Mandy cites these visits as evidence that Mark set out intending to be a fully involved father and presented photographs and video footage to the judge at last week’s tribunal. 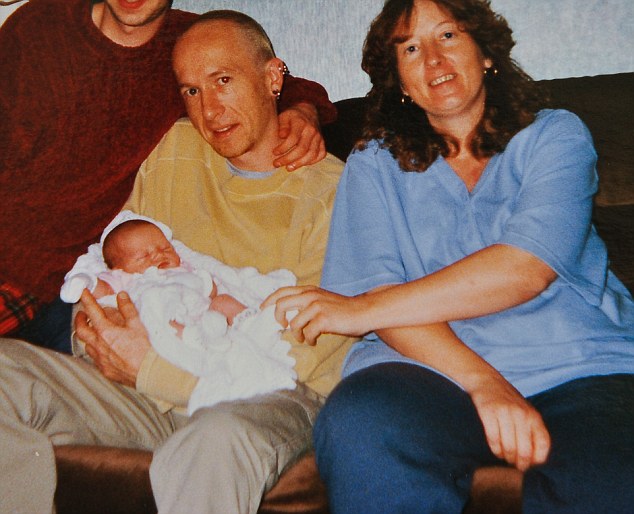 So why did Mark visit so often, if his intention was simply to be a sperm donor? Wasn’t it obvious that the already muddy parameters would be further blurred? ‘You feel obliged,’ he says. ‘For most of that time it felt as though we were being forced into it by Mandy for the sake of the children. We felt under pressure.’
Then came the day he arrived at the house to be greeted by the two girls shouting ‘Daddy!’ in unison.
‘What could I do?’ says Mark. ‘Take Mandy aside and have a word? I didn’t want to upset them, so I went along with it. As time went on, Mandy obviously decided she wanted her children to have a father, but that wasn’t the deal.’
So the Daddy who didn’t want to be Daddy acted the part, for a while, at least. And the two little girls believed it. Why wouldn’t they?
But as Mandy sees it, Mark genuinely wanted to be involved at that time – but then changed his mind.
The visits began to lessen as he devoted more time to helping his partner Shaun set up a business.
Letters were exchanged. In one, Mandy wrote: ‘I have just one question: what have you done as a father for these girls in five years?’
Mark responded in writing: ‘Obviously it appears I’ve got to be around more for them. I do want to be a part of their lives and so all I can say is I will make more effort to get together with them.’
These exchanges seem to suggest that Mark had agreed to be part of the girls’ lives, but Mark says they are simply indicative of the pressure he was under from Mandy and his attempts to keep her happy.
Not long after that, the fragile relationship between Mandy and Mark collapsed, and Mark didn’t return.
Gift of life
More than 700 children per year have been conceived thanks to donor sperm in the UK since 2000
It was 2004. Ri’anna was six and Shannon was four. Mark had been in their lives long enough for them to form a deep attachment to him. Over the next few years, Mandy says she made efforts for Mark to see his daughters, through their grandparents on Mark’s side, who, she says, continued to see the children. Ri’anna and Shannon both wrote to Mark to ask why he had stopped seeing them and if he still loved them.
‘I replied that they should ask their mother,’ says Mark. ‘I feel she is the one who should tell them.’
Mandy says she tried to persuade Mark to contribute financially to the girls’ upkeep through his parents, but her efforts were in vain.
‘It has been a real struggle financially for us,’ says Mandy. ‘Until the girls were born I had worked all my life, on the railways, at Southend Airport and as a landscape gardener.
‘But I had to give that up after I had an accident and badly damaged my back. I would love to work, I’m not a shirker, but it’s very difficult for me.’
She finally gave up in 2012 and contacted the Child Support Agency. After the CSA got involved, Mandy says that the girls’ grandparents also broke off contact.
Mandy and Mark attended a hearing in July 2012 where Mark was ordered to pay £26 a week. He immediately appealed.
Surrounded by chaos and confusion, it’s perhaps no surprise that Ri’anna and Shannon have suffered. During our visit, Ri’anna comes into the living room and says hello quietly, but does not wish to talk. Shannon stays up in her room.
‘Their attendance at school is about 65 per cent at the moment,’ says Mandy. ‘Ri’anna has been very down but it’s affected Shannon even more. It’s heart-breaking.’ Despite all this, Mandy has no regrets. ‘Having the girls was the best thing I ever did. Every day I tell them I love them.
‘I don’t see why being gay should have stopped me having children. I’m still a woman, with maternal feelings.
‘We were supposed to be a big, loving family. It just hasn’t worked out that way.’ It certainly hasn’t.
At this month’s hearing, Mark and Mandy, who has a new partner living with her, laid eyes on each other for the first time in ten years, but did not speak.
Mark was not challenging the CSA assessment of the contribution he should make. His appeal was that he should not be subject to a child support maintenance assessment at all.
In his ruling, Judge Brewer noted that the tribunal ‘is bound by section 1 Child Support Act which makes it clear that all parents are under a duty to support their children’.
Mark says: ‘The law is unfair. If a man donates sperm to a clinic he is protected by the law, but because I helped Mandy out on an informal basis I am not protected.’
Will he ever see Ri’anna and Shannon again?
‘I doubt it. Shaun and I saw the girls when we were friends with Mandy. When friendships fizzle out you stop seeing that friend’s children and this is the case here.
‘That is the point. We were just friends – I was never the daddy.’ 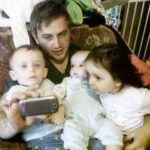 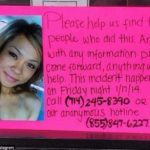