A couple of college freshmen have found more than just friendship at Tulane University: they’ve also discovered that they share the same biological father. Mikayla Stern-Ellis and Emily Nappi became friends after looking for roommates at the same residence hall at the New Orleans college.
Stern-Ellis and Nappi did not end up sharing a room but kept in touch on Facebook before meeting on campus. After that initial meeting, the women discovered that not only were they were both conceived by an anonymous sperm donor, but that the donor was Colombian.
They’d been saying jokingly, “Oh, there’s a 25 percent chance we’re sisters,” 18-year-old Nappi told the Tulane Hullabaloo, a student newspaper.
Mikayla’s parents, Heidi and Debra Stern-Ellis, were a little more curious.

“When Mikayla told us that they had talked a little bit and knew they both had a Colombian donor, Heidi and I said to ourselves,
‘You know, we remember going through the donor list, and there were probably about 1,000 donors.
We don’t really remember any other Colombian donors.”

On the left, Emily with mum Italia at her high school graduation. On the right, Mikyala is pictured with mum Debra.
The two students exchanged donor numbers via text message and realised that their similar looks weren’t such a coincidence after all. They shared other similarities, too; both were from California, participated in theatre, and even unknowingly bought the same jacket on a recent shopping trip.
The sisters now use matching Facebook profile pictures, and Stern-Ellis’s photo caption featuring an ancient Chinese proverb might sum up the situation best.

“An invisible thread connects those who are destined to meet, regardless of time, place, and circumstance. The thread may stretch or tangle. But it will never break.” 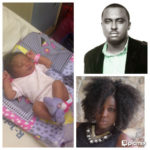