A Nigerian doctor resident in the United States has described his encounter with three young children who were said to have been possessed by demons. Dr. Geoffrey Onyeukwu, said that the encounter with the children was one “he’d never forget” after one of them spoke in a ‘demonic voice’.
He said:

“Twenty years, and I’ve never heard anything like that in my life,” the physician told the Star about their first meeting since the frightening events began. “I was scared myself when I walked into the room.”

NY Daily reports:
A Gary, Ind., mother of three claims demons caused her 12-year-old daughter to levitate and her 9-year-old son to walk on a hospital ceiling — accounts supported by medical personnel and police officials, according to a shocking report.

It was March 10, 2012 — four months after her family moved into a three-bedroom rental — that Ammons’ saw her daughter floating above her bed, the Indy Star reports.

Two clairvoyants told them the house was filled with more than 200 demons. The family’s church recommended pouring olive oil on Ammons’ children’s hands and feet, with smeared crosses along their foreheads, as a form of protection.

The mother found her youngest, a 7-year-old boy, inside a closet while allegedly talking to another boy only Ammons’ son could see. When asked what they were talking about, her son allegedly told her that the other child was describing what it was like to be killed.

On April 19, 2012, the family went to see Dr. Geoffrey Onyeukwu, whose encounter with the children was one he said he’d never forget.

“Twenty years, and I’ve never heard anything like that in my life,” the physician told the Star about their first meeting since the frightening events began. “I was scared myself when I walked into the room.”

According to a report by the Department of Children Services obtained by The Star, one of the boys began cursing at Onyeukwu in a demonic voice. He and his brother then abruptly passed out and wouldn’t come to.

The police were called. When both children woke up in a hospital, the youngest began screaming and violently thrashing about.

It took five men to hold the 7-year-old boy down, Campbell told The Star.

Rev. Mike Maginot, who performed exorcisms on Latoya Ammons and her children, was contacted by a hospital’s chaplain a day after Ammons’ children were taken from Ammons’ custody.

DCS family case manager Valerie Washington was then called in to evaluate the children. When she met them, the youngest, she reported, started to growl and flash his teeth at her. His eyes then rolled back into his head.

Then the 7-year-old lunged for his older brother and put his hands around his throat while saying in a voice that wasn’t his own: “It’s time to die. I will kill you,” according to Washington’s report.

Once released from his brother’s grasp, the 9-year-old allegedly started head-butting his grandmother. Campbell took his hand and started to pray when the boy walked backward up a wall and onto the ceiling. Once there he flipped and landed perfectly on his feet. Washington’s DCS report is corroborated by Willie Lee Walker, a registered nurse, who was in the room with them. 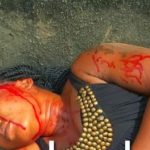