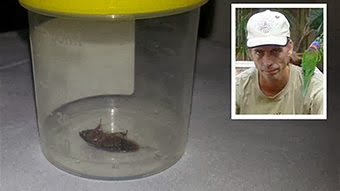 Hendrik Helmer has taken out the unofficial title for having the largest cockroach removed from an ear in Darwin, Australia.
The 2cm pest caused agonising pain and took about 10 minutes to die after Mr Helmer sought treatment at hospital. Mr Helmer, from the Darwin suburb of Karama, says his ordeal began early on Wednesday morning when he was woken up about 2.30am with a sharp pain in his right ear. He immediately thought some type of insect may have crawled inside while he slept.
He says the pain was overwhelming and despite a few bouts of relief, began to get worse. “Later on, when I stood up and it happened it would sort of hunch me over and drop me down to the ground,” Mr Helmer said. “I was hoping it wasn’t a poisonous spider.
I was hoping it didn’t bite me.” After using a vacuum cleaner to try to suck it out, and squirting water from a tap down his ear to flush it out, he apparently angered the insect. “Whatever was in my ear didn’t like it at all,” he said. As the pain increased, Mr Helmer, who works as a supervisor at a warehouse, roused his flatmate to take him to the Royal Darwin Hospital, where he was quickly ushered through to see a doctor.
Mr Helmer says the doctor put olive oil down the ear canal, which forced the still-unidentified insect to crawl in deeper. Eventually, it began to die. “Near the 10-minute mark… somewhere about there, he started to stop burrowing but he was still in the throes of death-twitching,” he said. At that point the doctor put forceps into his ear and pulled out the cockroach, which measured about two centimetres long. “She said, ‘you know how I said a little cockroach? That may have been an underestimate.’ “They said they had never pulled an insect this large out of someone’s ear.” Despite his ordeal, Mr Helmer says he does not believe he has a cockroach problem in his home and he won’t be conducting an eradication program.
He also does not intend to sleep any differently or take precautions against it happening again, although friends have since told him they were so freaked out by his experience they have begun sleeping with headphones on or earplugs in.
No long-term effects are expected from Mr Helmer’s ordeal, although on Friday he still had trouble balancing and experienced pain when he moved his jaw.
Source: ABC

Pregnant woman, 9 others burnt to death as bus goes up in flames