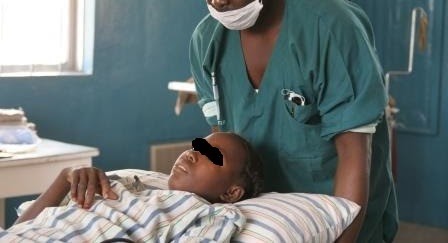 A 25-year old woman in a remote village of Yolde Pate in Yola South Local Government Area of Adamawa has been delivered of a sizable stone. Madam Amina Bello of Unguwar Jalo village narrated her story at the opening ceremony of Vesico vaginal fistula (VVF) free medical treatment at the Yola Specialist Hospital.
Bello, who was also a VVF patient, told the gathering that after four years pregnancy, she was delivered of a sizable stone last year.

“I was carrying a pregnancy for four years, which I bitterly suffered because of the heavy weight of what was contained in the stomach.

“It was last year around June, I started feeling labour and I was in that condition for three days and finally I was delivered of a stone”, Bello said.

She said it was after the delivery she discovered that she had VVF. Dr Sunday Lengmang, Director VVF Centre, Jos, confirmed that giving birth to a stone or any object was possible.

“Stones and other solid objects can form in a human body in different cases.

“Stones can form in a gall bladder, urinary bladder and other several parts of urinary tracks”, he said.

The medical expert said why VVF patients were prone to giving birth to stones or any solid object was because they drank less water to reduce urine leakage. He said as a result of taking less water, their urine become concentrated.

“Inside urine, there is salt, sodium and chlorine, and when the urine becomes concentrated, the salt is crystallised and finally forms itself and latter ends up as a stone”, he said.

Lengmang confirmed that three VVF patients had stones in their placentas and they would go under surgery. He said the size of the stones uncovered from the three women was six by seven and three by four centimetres.
Lengmang advised VVF patients to drink more water instead of taking less to prevent them from risk of having stones.
Wife of the Governor, Dr Halima Nyako, said the medical treatment was free and that over 150 women benefited in 2013.