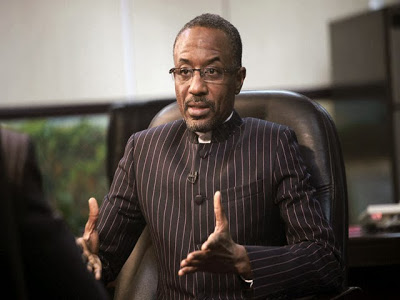 By this action, Sanusi has introduce a dangerous precedence in our polity. Now, the rich and mighty can steal billion of dollars and naira and just run to any kangaroo court to secure a restraining order!

The suspended Governor of the Central Bank of Nigeria, Mallam Sanusi Lamido Sanusi, has obtained a court order restraining the Attorney General of the Federation and Minister of Justice, the Inspector General of Police and the Department of State Security from arresting him.

The restraining order, obtained from the Federal High Court, Ikoyi, Lagos, directed the heads of the DSS, the police and the country’s Ministry of Justice and their agents not to arrest Sanusi pending the determination of the motion on notice brought by the embattled CBN boss.

Sanusi obtained the order yesterday and It was issued by Justice I.N. Buba. He obtained the order shortly after returning to the country from Niger Republic where he was attending a conference and was informed of his suspension by President Goodluck Jonathan.

The AGP, IGP and DSS are the first, second and third respondents in the case filed on behalf of Sanusi by V.O.M. Alonge, Ikem Isiekwena, Bashiru Ramoni, Benjamin Omoruyi and Loretta Ossai.

The court order, endorsed the Registrar, O.C. Osakwe, also called for the maintenance of status quo in the matter pending the determination of the motion on notice.

Sanusi was also granted the leave of the court for the service of the originating summons and other accompanying court processes on the defendants outside the jurisdiction of the court and in Abuja.
The affidavit of urgency was deposed to by Sanusi.