A deputy director with the State Security Service (SSS) in Oyo is said to have taken his wife to court.
Edward Magaji filed the complaint against his wife in a Magistrate court sitting in Yola, the capital of Adamawa. Mr. Magaji accused his wife and mother of his four children of damaging the windscreen of a car he bought for his mistress.
Leadership reports:
The SSS director told the court that his wife had been a pain in the neck since he assisted his girlfriend, Miss Natasha Aminu Danbaba, a nurse with Specialist Hospital, Yola, with some token to buy a car in Ibadan, adding that his wife had been terrorizing Natasha, calling her all sorts of names to the extent of going to her work place to fight her.
He added that his wife committed the action in his presence while he was in Natasha’s house and engaged them in a fight resulting to the breaking of the car’s windscreen.
When the counsel to the wife, Barrister Binanu Eston asked Magaji to define the relationship between him and the girlfriend, Magaji simply said he was tired of his wife and could not answer such a question as he has since divorced her for her many troubles.
The Judge later adjourned the case to Monday, February 17, for further hearing. 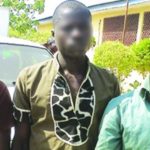