Nigerian-Hollywood actress Uzoamaka Aduba last night won an Emmy Awards for her role as Suzanne “Crazy Eyes” Warren on the Netflix television series Orange Is the New Black (2013–present), for which she won the 2014 Creative Arts Emmy Award for Outstanding Guest Actress in a Comedy Series.

In this article, She writes of the struggles, battles, and losses through which her name Uzoamaka (The road is good) has helped her persevere—to the role that made her famous.

I am the daughter of Nigerian immigrants. My mother is a survivor of both polio and of the Igbo genocide during her country’s civil war in the late 1960s. Each Igbo name has a story behind it, so upon my birth, my mother carefully chose my name to be Uzoamaka, which means “the road is good.”

My mother is a fighter. After she battled polio and learned to walk again, the doctors told her she would be a cripple her entire life. Instead of accepting defeat, she refused this fate and went on to become the West African Women’s Singles tennis champion in college. This summarizes my mother completely.

My mom witnessed war firsthand, a chapter in her life with which she still struggles daily. It was after this that she moved to the United States, and experienced the wonder of marriage and the revelation of having her first two children. Soon after, however, she became a young widow, and feeling defeated, she moved back to Nigeria.

Knowing that postwar Nigeria could not provide the life that my mother wanted for her children and herself, she fought to return to the U.S.—and with the help of family and friends, she did. A single mother of two, my mom completed her first master’s degree, got remarried, and, by the grace of God, became pregnant at a later stage with her third child…me.

Her entire road to that point—the struggles, the trials, the battles and the losses—somehow brought her to fulfillment upon the arrival of her new daughter, whom she named Uzoamaka. The road is good.

I heard the word “no” so often that it started to feel like a second name.
My name, less the name itself, but rather what it represents, is precious to me. There have been many struggles, trials, battles, and losses through which my name has helped me persevere. In those moments, I have reminded myself that the road is good, and thereafter, I have emerged.

I left my home in Massachusetts after college to move to New York City to pursue my dreams of acting. I took roles for free. I waited tables. I didn’t care because it was work. My uncle once told me, “Your parents didn’t leave Nigeria for you to just be standing still, Uzo.” These words resonated with me long after I had first heard them, and I took them to heart. I jumped at any available opportunity to practice my craft. I would not allow my mother’s journey to be in vain.

During my time in theater, there were lows. Shows closed, unexpectedly (or worse, never opened!). The magic of landing my first role on Broadway went “poof” in a matter of a few weeks. Frequently, I called my mom to seek guidance (and to shed some tears). Through all of my disappointments and heartbreak, she never played “the practical parent” or pleaded with me to pursue something more stable. Instead, she encouraged me and supported me. “Just keep pushing,” “Keep going,” she would say.

The summer before I started work on Orange Is the New Black, I found myself on the brink. It was my first pilot season and I had put it all on the line. No theater, no play offers—film and TV only. I heard the word “no” so often that it started to feel like a second name. I watched my savings dwindle.

One day, after getting lost and arriving 20 minutes late to my audition, I hit my breaking point. I tried with all my might to salvage the audition, but in true dramatic actor fashion, I convinced myself that this was a sign that I wasn’t meant for this industry. I considered the notion that perhaps the time had come for me to pursue a more traditional road and to satisfy the hopes that immigrant parents have for their children. Perhaps teaching or law? Something that would guarantee my bank account to return to positive territory.

That same day, despite tissues still damp from the aftermath of the botched audition, my life changed in a matter of two hours. I got the call for a two-episode arc on Orange. “No” finally turned to “Yes.”

At times, my first season felt daunting. This was my first role on television and there I stood in the midst of formidable talent. I kept thinking, “Just keep pushing,” “Keep going.” And I did keep going. Two episodes multiplied into more and eventually, I was promoted to series regular for Season 2. And here I am with a Critic’s Choice Award and now, and Emmy nomination. The road, indeed, is good.

At certain moments, the struggles and the losses have felt like the definition of my acting career. But in hindsight, they were just part of the journey to get me to where I stand today. Those low points helped me to recognize the dream, now that I see it more clearly. A dream that my mom had also seen, as she stared into the eyes of the baby girl whom she named Uzoamaka.

This article was written before last night………..And She Won an Emmy Awards last night…. 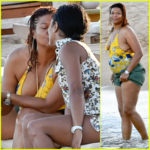