Zamfara Police Command on Wednesday confirmed that during the clash between the force and bandits in the state on November 29th, 16 of its personnel and 104 bandits were killed.

The death of the policemen was confirmed in a statement in Gusau by the command’s Public Relations Officer, Mr Muhammad Shehu, Superintendent of Police, while noting that the clash happened when the force was raiding on criminals’ hideouts in the state.

Shehu debunked media report that 50 policemen were killed in the attack.

According to him, on Nov. 29, 2018, there was a serious onslaught on bandits by the police which resulted in the killing of 104 bandits.

He said in course of the confrontation, 36 policemen got missing after which 16 of them were found dead and 20 recovered alive.

“After search and rescue operations embarked on by police Joint Intervention Force to rescue the missing policemen following the heavy attack on the bandits, 16 police officers were found dead while the remaining 20 were rescued alive.

“Over 50 bandits’ hideouts in three camps had earlier been destroyed while over 500 cattle and 79 sheep were recovered from the bandits.”

“The Police Joint Intervention Force operations in the state under the command of the Deputy Inspector-General of Police, Operations, are making progress.

“There is serious ongoing operation by the police to root-out the remnants of armed bandits and other criminal elements in the identified hideouts in the state.

“The Inspector-General of Police, Ibrahim Idris, condoled the families of the deceased policemen.

“He directs a befitting burial for the gallant officers, prompt processing and payment of life assurance benefits and other entitlements to their families.

“The IGP is saddened with the death of the gallant officers whom he described as heroes of the force.

“Their demise is a great loss to Nigeria Police Force and our dear nation. The supreme price they paid for the security and safety of the country will not be in vain.

“In spite of this unfortunate situation, the police will not relent in efforts at ensuring that armed banditry and other crimes are brought to the end in Zamfara and Nigeria at large.”

The spokesman appealed to communities in the state to continue to support police with information on security in order to enhance their operations. 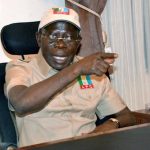